California’s Economy Is Growing – But Where? 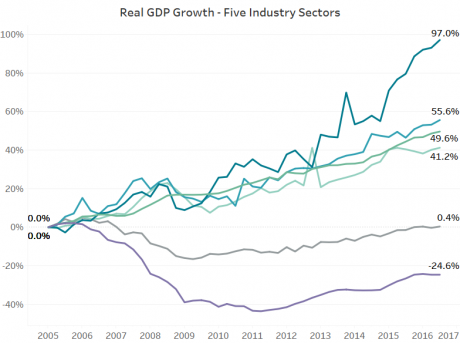 May 4, 2017 Geoff Neill
(Another in a continuing series about California’s uneven recovery and its effects on counties.)

Let’s start with a quiz.

Before we get to the answers, why do we care?

As we look at how uneven California’s recovery has been, examining which industry sectors have been growing can give us clues as to why, for instance whether those industries are widespread or centered only in certain areas.

More directly relevant to counties, different industry sectors tend to provide revenues to different levels of government—income or corporate taxes versus sales tax, for example. So examining which sectors are growing and which are not can give us insight into how revenues might be changing into the future.

Let’s also give ourselves some context. California’s economy overall, despite the severe recession, grew by 21.6 percent between the beginning of 2005 and the third quarter of 2016. The United States as a whole also grew, but more slowly, with overall growth of 16.6 percent.

All of these numbers are for “real” GDP, meaning that it already takes inflation into account. If it didn’t, part of what looks like growth would instead just be attributable to higher prices, not actual growth.

Now, to the quiz answers.

Construction, on the other hand, sits at the other extreme. The drop-off in construction activity was one of the leading indicators of the recent, deep recession and it hasn’t recovered since. Since 2005, the construction sector’s real GDP has fallen nearly 25 percent. In the process, it has gone from accounting for 5.7 percent of the state’s economy to just 3.5 percent.

Retail trade has grown, but barely. Of the 21 sectors we use to examine the economy, only two have shrunk, but with just 0.4 percent growth over more than ten years, retail trade has come awfully close.

What about number four, the manufacture of durable goods? Easy, everybody knows manufacturing is tanking, right? Except that it’s not. The industry has grown a whopping 55.6 percent since 2005 in this state—that’s nearly twice as fast as private industry overall—and it’s grown by 22.5 percent in the United States. In California, only the information industry has grown more quickly.

We’ll take the last two questions together. The health and social services sector and the professional services sector are the third and fourth fastest growing areas of the economy after information and durable goods manufacture, with growth of 49.6 percent and 41.2 percent, respectively. Those four industries, along with education, are the only ones that have grown faster than the economy as a whole.

What does it all mean?

While we can feel good about the overall health of California’s economy, as we’ve seen in the our first two articles on the state’s uneven recovery, most counties have less tax revenue now than they did ten years ago, even after the return of tax revenue previously diverted to redevelopment efforts. The trends above give us a good idea why.

Two of the three industries that are growing most slowly or shrinking—construction and retail trade—feed directly into county revenues: property taxes that make up the bulk of general purpose revenues and sales taxes that pay for realigned health, mental health, welfare, and public safety services.

The industries that are driving California’s economic growth produce revenues that feed into state and federal revenues: corporate and personal income taxes. The information industry is heavily concentrated in just a few counties, limiting the indirect revenue benefits (like increased home sales and purchase of retail goods) to those areas. Some professional services are included in the sales tax in many parts of the U.S., but California taxes fewer services than almost any other state. Even the manufacture of durable goods, while heartening, does not translate into jobs and the benefits they bring to communities. In fact, the machines used to automate many manufacturing processes— making human labor less needed—were exempted from sales taxes a few years ago.

One last quiz question, for extra credit. Does the government sector in California represent a smaller or larger share of the state’s economy compared to 2005? Answer: smaller. Government in California accounts for 11.9 percent of the economy, down from 13.5 percent at the beginning of 2005.