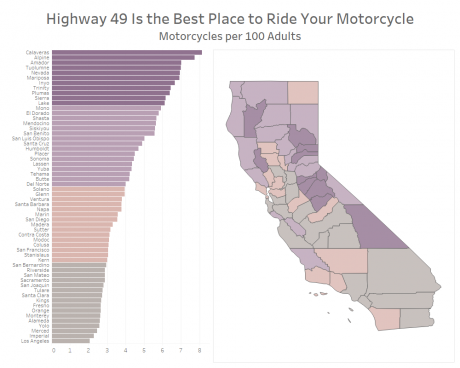 If you own a motorcycle, chances are you live in LA. After all, more than a quarter of all adults live in Los Angeles County (26.2 percent, to be exact; or, to be even more exact, 26.21417 percent).

But surprisingly only 18.6 percent of motorcycles in California are registered there, giving it the lowest number of motorcycles per 100 adults of any county. You’d think it would help cut through traffic…

Instead, the highest rates of motorcycle ownership are in Gold Country, from Amador and Alpine through Calaveras and Tuolumne down to Mariposa, all of which have between 6.9 and 8.1 motorcycles per 100 adults, well above the statewide median of 3.9.

Other areas of the state with windy roads and an abundance of natural scenery also have higher rates of motorcycle registration, places like Trinity, Lake, Plumas, Sierra, Nevada, and Inyo Counties.

If you’re clever, you might think there’s a simpler explanation: age. The ten counties that top this list all appear within the top twelve of another list: those with the highest proportion of adults over 65.

But it doesn’t hold up. The number of motorcycles per 100 adults under 65 still gives us the same ten counties, and in fact increases their lead over the rest of the state.

Proving once and for all that Highway 49 really is the best place to ride your motorcycle.