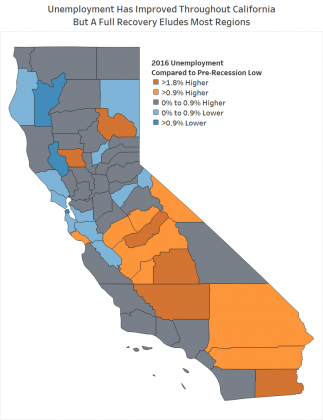 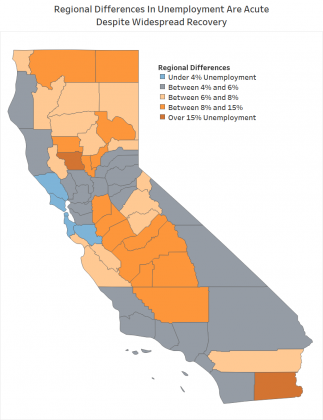 In our first two posts about California’s uneven recovery, we explored how county per capita property taxes and all taxes combined are still well below their pre-recession peaks for most counties, after adjusting for inflation.

Studying changes in the unemployment rate also reveals a picture of an uneven recovery, although uneven in somewhat different places.

While property taxes are down in all but a few counties and all taxes combined had shown improvement in a few scattered regions (the north coast, southern Bay Area, southern Central Valley, and LA/OC), the unemployment rate has lagged specifically in the southern inland counties and the Central Valley.

In these two regions, together stretching from Merced and Mariposa Counties down to Imperial, the unemployment rate remains at least 0.9 percent higher than it was before the recession.

In four of those counties it is at least 2 percent higher than before the recession, and in one, Imperial, the rate remains over 7 percent higher.

This is not to minimize the fact that every county has seen its unemployment rate drop since the depths of the recession. However, the counties where recovery has proceeded more slowly are the same ones where the recession hit hardest, and the ones that had higher unemployment even before the financial crisis.

As state officials prepare California’s budget for this year, they should keep in mind that counties, both the governments and the people are not all in the position to weather cuts and cost shifts.