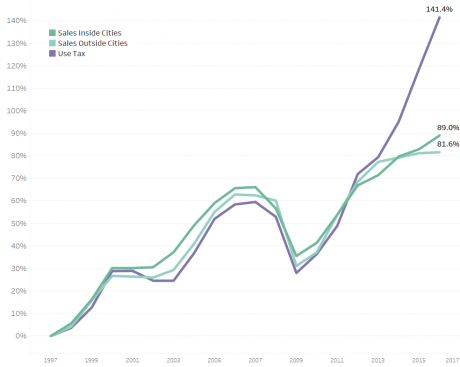 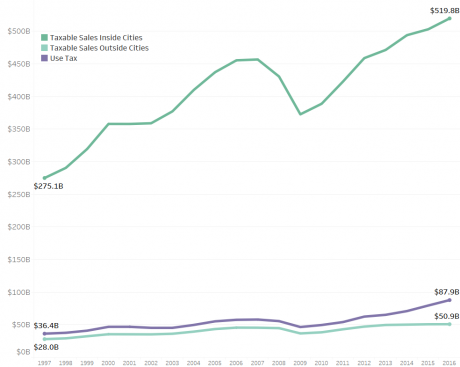 The tech boom of the past two decades has resulted in many changes in county operations, and now its fiscal effects are becoming clearer as well.

One of those effects is a dramatic spike in use taxes, beginning around the end of 2012. From 2013 to 2016, transactions subject to the use tax rose by an astonishing 34.6 percent, while those subject to the sales tax—primarily at brick-and-mortar establishments—rose by 9.5 percent.

For context, over the previous fifteen years, the two types of sales tracked each other very closely, both of them rising and falling together through recessions and recoveries and both ending 2012 around 70 percent higher than they were in 1997.

One explanation for this spike is the increase in online ordering by consumers, along with Amazon opening distribution centers and beginning to collect tax for those sales pursuant to their agreement with the state in September of 2012. Prior to the agreement, use tax collection largely relied on consumers volunteering the information when they filed their income taxes. (Very few consumers chose to do so.)

Generally, the use tax applies to merchandise used in but purchased outside the jurisdiction of a county or city when the sales tax would have applied if the purchase had been made in the jurisdiction. In the past, the use tax was largely attributed to the purchase of heavy construction equipment shipped from out of state. However, with the rise of online ordering through internet-based retailers, sales subject to the use tax is now a larger share of Californians’ everyday lives.

While the percent increase will likely continue due to the continued growth of online ordering, the use tax is still a long way away from becoming a competitive revenue stream.

Gregory Hutchins is a UC Riverside Ron Loveridge Fellow interning at CSAC. Geoff Neill is CSAC’s Principal Policy and Fiscal Analyst. Data for this analysis and the accompanying charts came from the California Department of Tax and Fee Administration and from HdL.
Navigation Term Highlight