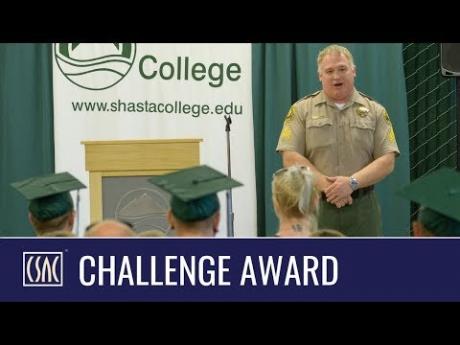 “It really is restorative justice at its finest.” That’s how Shasta College’s Robert Bowman describes a local collaborative program that is changing lives.

Created in 2013 by Shasta County and the local community college, the Shasta Technical Education Program-United Partnership (STEP UP) was designed to provide formerly incarcerated community members with educational opportunities that result in employment.

STEP UP provides six different educational and training programs: business and office administration, automotive technology, heavy equipment operation and maintenance, welding, and wildfire fighting. These programs are the result of an economic survey conducted that examined the local job market and potential employment opportunities. These programs help the students overcome to significant barriers: lack of education and finding employment

The Shasta County Probation Department provides a dedicated staff member who assists in vetting students and providing ongoing supervision. Probation Liaison Nick Hitchko works closely with the students and their success is important to him.

“As a team, we can help you get certificates and degrees and employment,” explains Hitchko, who spends time regularly on the local college campus to work with the STEP UP students. “And that breaks the cycle of recidivism.”

For STEP UP student Christine Mclaughlin, the program is giving her an opportunity she hasn’t had before. “I wanted to get my life back on track … and stop doing the stuff I was doing and this program opened up a lot of doors for me.”

Beyond the positive impacts associated with helping individuals become productive members of the community, the program is saving the county millions of dollars whereas it costs about $40,000 a year to incarcerate each individual, STEP UP’s expenses are approximately $5,000 per student.

Beyond the County and local community college, local nonprofits the Good News Rescue Mission and California Heritage YouthBuild Academy, have been strong partners and advocates of STEP UP.

While CSAC has honored the program with a 2018 Challenge Award, this isn’t the only award the STEP UP program has received. It was also named the California Community College Chancellor’s Office Student Success Program of the Year for 2017. Based on this success, the State awarded the program funds to expand to the nearby counties of Tehama and Trinity that are within the community college district.

Student Scot Straits had been in and out of trouble with the law most of his adult life. Now Scot beams with pride when he talks about when he learned he made the Dean’s List. “I shot that right out to my family and said, ‘This is for real’.”

This Shasta County program is a recipient of a 2018 CSAC Challenge Award, which spotlights the most innovative programs in county government.