The following blog post is offered by Jeannine Aversa, Chief of Public Affairs and Outreach at the U.S. Bureau of Economic Analysis.

Ever wonder about the size of your county’s economy? Whether a particular industry category is in a slump or a boom? County officials in California and across the country now have access to those answers and more, thanks to the U.S. Bureau of Economic Analysis (BEA).

BEA released the size of every county’s economy with industry detail for the first time in December 2019 and the plans to make this an annual report.

Estimated annual gross domestic product, or GDP, for the years 2001 through 2018 is also available for more than 3,000 counties. The data will include contributions to GDP by 34 industries, such as manufacturing, retail trade, and health and social assistance.

The county statistics can be used for comparisons to other counties, metropolitan areas, state economies, or the nation overall.

Other questions counties can answer thanks to this data include:

For instance, did you know that at 10.2 percent growth, Santa Clara County was the fastest growing large county in the nation? The information industry was the leading contributor to the county’s growth. 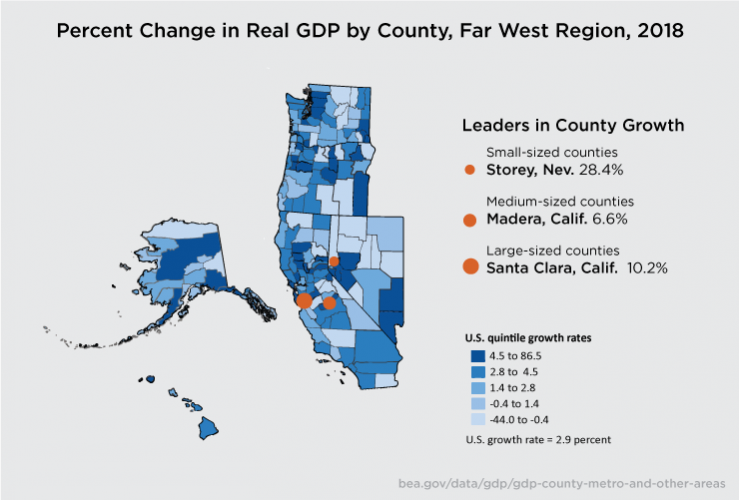 Measuring GDP at the county level is a milestone in BEA’s efforts to better capture how economic activity is distributed across the nation. This new information, in high demand by data users, complements the county personal income statistics BEA has produced since 1975.

In addition to industry contributions to GDP, the data includes current-dollar GDP; inflation-adjusted or real GDP; percent change from the preceding year; and quantity indexes.

Business owners, County officials, and policymakers at all levels of government can use these statistics to make better-informed decisions about investments, economic development, or economic policies.

High-quality, consistently defined time series data for counties across the United States will aid research into topics such as the distribution of national economic output, local economic dynamics, and the effectiveness of economic development strategies.

GDP statistics are based on the place of production, such as the county where an office or factory is located, regardless of where the workers live. This differs from BEA’s personal income statistics, which measure the incomes of all people residing in a county, no matter where they work.

BEA released prototype county GDP data in December 2018 and sought evaluation and feedback from data users. The responses and further research led BEA to refine its methodology and add significant industry detail to the official release.

Learn more on the county GDP page of bea.gov. All local area GDP data is available through that page and in BEA’s Interactive Data.