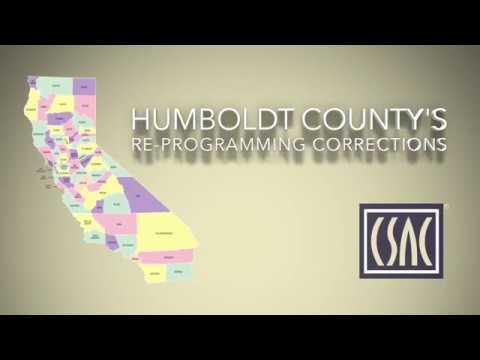 Vanessa Vrtiak’s passion and commitment light up a room – even if that room is a cell block in the Humboldt County Correctional Facility.  As a Programs Coordinator for the Sheriff’s Office, Vanessa is focused on helping inmates break the cycle of recidivism. It’s no easy task, but one to which she is committed no matter how many times they find themselves back behind bars.

Vanessa has played an integral role in the development of Humboldt County’s re-entry program that connects inmates with community resources and potential employers to assist with the transition once they are released.  Representatives from local services providers and companies come into the jail over a two-day period, spending time with inmates in each cell block. Think of it as a form of career fair for inmates. The enthusiasm among the inmates is evident as they learn about available assistance and the potential of lining up work.

Vanessa has witnessed recidivism in her family first hand, and as a Humboldt State graduate student she conducted research on recidivism in rural counties. That path led her from student to volunteer in the correctional facility to ultimately a paid position in the Sheriff’s Office.

The inmates are grateful for the re-entry program.  “They love it … it gives them hope,” Vanessa explains.

Administrative Sergeant Dennis Griffin agrees. “Giving them the opportunity to develop a plan is critical to having a successful release. Often when they don’t have that plan, it’s easy to go back into the same patterns. “

On the day CSAC visited the jail, representatives from community service providers were meeting with inmates. The room was buzzing with activity as inmates sat down to learn about resources potentially available to them, ranging from housing and education to food security and alcohol and drug care services.

Inmate Anthony Valenzuela has been incarcerated off and on for three years. He sees this program as making a difference. “This is a big opportunity. If people want to change, this is a place to start.”

Vanessa explains how “when people have hit bottom, it’s important to know there are still opportunities and options out there. Life goes on. It’s incredibly powerful for people to hear and see the support. I feel that if someone wants to change their life, we should do everything we can to support them.”

Beyond being able to participate in meetings with community service providers and employers, inmates are given instruction on how to develop a resume, search for employment and prepare for an interview. Upon release, each inmate who participates in the resume class is provided with a flash drive containing a list of community and employment resources, as well as a copy of their new resume.

The inmates appreciate the County is willing to invest in them by bringing them services and opportunities they can utilize upon release, Sgt. Griffin says. “It’s hope we are instilling in them.”

Vanessa talks about the phone calls they receive from former inmates thanking them for the support. “The jail is part of our community whether you like it or not. By investing in these people, we are investing in ourselves.”

During a short break on the day we visited, services providers had an opportunity to catch their breath and trade notes.  Before long, they were ready to head into another cell block – but not before these words of optimism from Vanessa: “Let’s make magic!”

This Humboldt County program is a recipient of a 2017 CSAC Challenge Award, which spotlights the most innovative programs in county government. The Call for Entries for the 2018 awards will be released in April.