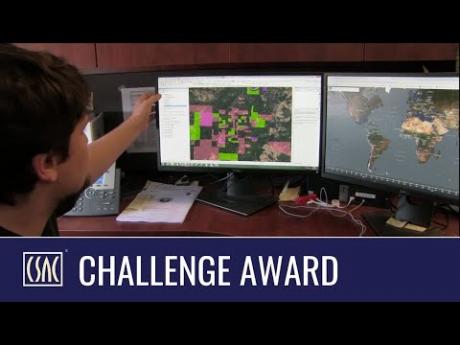 Humboldt County has taken its code enforcement of illegal cannabis grows to new heights – thousands of miles above the Earth to be exact. It’s a state-of-the-art strategy being employed by the County Planning and Building Department to identify unpermitted cannabis cultivations.  Now instead of sending staff into the depths of the 4,000-square-mile county to come across grows that are not in compliance, all it takes is a click of the mouse to review current satellite footage.

Illegal cannabis grows are nothing new to the County. It’s estimated that at the time of legalization in 2016 there were more than 15,000 cultivation sites on 6,000 parcels.  Despite the legalization of cannabis, there are still an enormous number of illegal grows taking place. And that means cultivations that are not in compliance and causing significant environmental impacts.

Prior to the program, the County was primarily dependent on citizen complaints. Staff would be sent to investigate, and it could take a full day just to try to inspect three or four sites. There was also the obstacle of encountering numerous locked gates or not being able to find the hidden cannabis grow.

That all changed with the eye in the sky.

“From desktop computers we can monitor the entire expanse of the County,” explains Bob Russell, Deputy Director for the County’s Planning and Building Department. “We can assess whether structures are permitted, if there’s been tree removal and grading and if that’s permitted, and very efficiently assess whether there’s violations on the property or whether it’s permitted activity.”

The satellite program is achieving one of its primary goals: reducing environmental impacts. In fact, its official name is the Humboldt Environmental Impact Reduction Program.

“The ‘Green Rush” resulted in a massive increase in watershed impacts,” says Scott Greacen, Executive Director of Friends of the Eel River, who is very concerned about environmental impacts from the industry. “The use of satellite imagery has been one of the tools that really advanced our understanding of those impacts. “

Unpermitted sites often involve poor grading, the use of pesticides, roads never intended for daily travel; failed culverts, badly engineered ponds, and loss of tree canopy and timberland. The impacts to water quality and wildlife go on and on.

“We need to regulate and hold responsible legitimate actors, but we also critically have to be able to find and hold responsible people who are not following the rules. That is not easy to do,” Greacen continues. “We have enormous areas of steep, rugged, heavily forested land that is hard to get to. Satellite imagery pulls the cover back on those operations. “

Use of satellite technology has resulted in the volume of cases being processed to increase tenfold. Since the program was implemented, more than 1,000 non-compliant sites have been identified. About 400 have come into complete compliance and another third working toward compliance. Others have just simply stopped growing.

Humboldt County staff believe they are the first in the country to purchase satellite time to collect data solely for the purpose of identifying and monitoring cannabis operations.  While there is obviously a cost involved with this purchase, the County is saving significant amount of staff time; with fines set at $10,000 per day for each violation, revenues have significantly exceeded the cost of the imagery and staff time to manage it.

Russell sums up the value of the program: “Find them, notice them and fix them  – it can be done in a very condensed amount of time.”