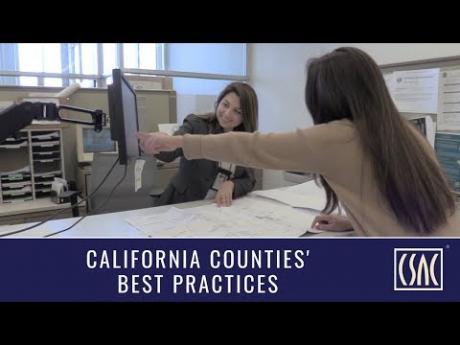 More than 10 million people live in Los Angeles County – that’s a larger population than all but seven of our states. And out of those 10 million people, about 25 percent are Spanish-speaking and not proficient in English. When it came to the complex world of planning and permitting, many residents could not fully understand what they had to do.

“The culture in the planning world here in the United States is different than any Latin American country so it’s difficult to understand something that’s created here — and developed for a process that’s implemented here – and trying to apply it to something the Spanish-speaking community doesn’t understand,” explains Alex Garcia, Supervising Regional Planner for the Los Angeles County Department of Regional Planning.

English words sometimes have no direct corresponding words in Spanish. For example, the word “yard” can be used to refer to a lawn or a unit of measurement. In Spanish, “yarda” is only formally recognized as a measurement unit.

Misinterpretations can have significant repercussions. Planner Garcia tells a story about a constituent who was instructed to fix his garage, and he interpreted that to mean he had to tear down his garage – not realizing that a garage is a planning requirement.

“Just for the average English-speaking individual the planning process and terminology can be difficult to understand. When we speak with someone who is primarily Spanish speaking, it’s even more difficult to explain these concepts,” says Edgar De La Torre, Regional Planner. “Just a small misinterpretation can lead to a constituent becoming frustrated and feel that we are not taking their concerns into consideration.”

To overcome that challenge, Regional Planning Department staff believed it needed to enhance its translation and interpretation services beyond just hiring bilingual staff.  The result was the creation of a committee comprised of Spanish-speaking planning staff.  Out of this committee came the development of a Spanish Planning Glossary, a database of technical planning terms in Spanish that are used consistently in all aspects of the Planning Department’s operation.  This glossary of frequently used planning terms ensures that oral interpretation and written documents in Spanish are consistent and accurate.

“What’s unique about our program is that the planners are hands-on; they are very engaged with the actual translation work,” said Erica Gutierrez, Senior Regional Planner.  “Not only are they bilingual but they are technically competent and culturally competent.”

It has proven to benefit Spanish-speaking constituents during walk-in consultations, and at community meetings and public hearings. “Everybody is using the same common language. The response we have been getting from the community has been very rewarding,” said Regional Planning Director Amy Bodek.

“It’s really important for us to connect with all members of our community regardless of what language they speak. If you can’t communicate with your residents, you can’t help them get services. The ability to be able to speak in their native language is really a constituency service,” Bodek said.

Once the Spanish Planning Glossary was developed, the planning staff has continued working as a committee to look for other ways they can enhance the relationship with Spanish-speaking constituents, including plans to distribute the glossary to Los Angeles County’s 88 cities, and also to make planning documents more accessible and easier to fill out.

Los Angeles County’s Spanish Planning Program has received statewide and national recognition. Beyond being the recipient of a CSAC Challenge Award, the Planning Department was honored by the American Planning Association in April. Planners in California and throughout the nation have contacted the Los Angeles County planning staff to learn more.

This Los Angeles County program is a recipient of a 2017 CSAC Challenge Award, which spotlights the most innovative programs in county government.