Monterey County Gives Farmworkers a Voice in their Health and Safety 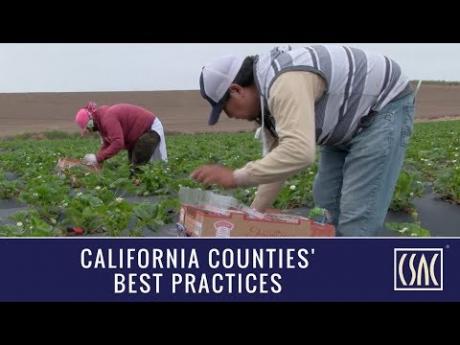 Agriculture is a $4.5 billion industry in Monterey County, making it one of the largest producers in the state. Behind all of that production are as many as 50,000 farmworkers – many non-English speaking – who undertake back-aching work to ensure the produce reaches market. Yet historically these farmworkers worked in conditions that were sometimes hazardous. And historically, they had a limited voice in the community.

A collaborative Farmworker Advisory Committee, developed by the Monterey County Agricultural Commissioner’s Office and the non-profit Center for Community Advocacy, now provides farmworkers with a voice to kick-start change, particularly in the area of health and safety. The program is the first of its kind in the state – and perhaps the nation.

Farmworkers are now able to express their concerns through the Committee as well as more traditional methods such as directly to the Agricultural Commissioner’s Office. Ways to enhance farmworker safety when it comes to pesticides was at the top of the list. A program was launched to improve pesticide warning signage in the fields, going beyond state regulations. Participating growers now provide application-specific time and date on the field posting signs so workers know when it’s safe to enter a recently sprayed field.

Another successful program developed by the Advisory Committee was the development of a wallet card outlining workers’ rights. The card also contains the Agricultural Commissioner’s Office contact information so that workers can directly report concerns or incidents. Thousands of cards have been distributed, and the Agricultural Commissioner and the Committee has have pledged to provide cards to all farmworkers in the county.

Beyond the development of the pesticide warning signs and wallet cards, another significant benefit has come out of the work of the Committee: a growing bond of trust and cooperation between farmworkers and the County has been established.

There has been significant buy-in from the Monterey County agricultural community since the Advisory Committee was launched. The Board of Supervisors, health officials, agricultural associations and community leaders have all shown their support. An increasing number of growers are voluntarily participating, by posting the pesticide signs created by the Committee.

Armando Ascencio worked for nearly two decades in the fields; he now works on behalf of the Center for Community Advocacy.  Using a translator, he talks about how before the current pesticide signage, the farmworkers didn’t know when it was safe to enter the fields. “The reality was that even when we asked the (field supervisors), they themselves did not know the safe times to enter.”  Now he sees “significant improvements” in safety protocols.

A farmworker in Monterey County for nearly 20 years, Saul Reyes echoes these sentiments. Talking through a translator, he discussed how he feels “protected” by the pesticide warning signs, calling them “really good” for the safety of those applying pesticides and for others working in the fields.

This  Monterey County program is a recipient of a 2017 CSAC Challenge Award, which spotlights the most innovative programs in county government.