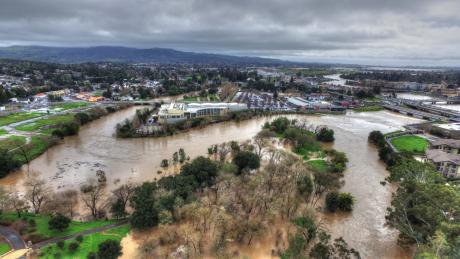 Several years ago, a swollen Napa River meant sandbags and road closures for anxious home and business owners concerned about flood waters spilling over into their lives.

With this winter’s watery assault on Northern California preceded by years of drought, the Napa Creek/Napa River Flood Control Project had the opportunity to demonstrate its value. Napa County is about two thirds of the way through the multi-year, multi-project flood control program – and it has already reduced the threat of flooding in the City of Napa and become a nationally recognized collaborative model for approaching multi-agency, multi-purpose public works projects.

The Napa River is one of the last undammed rivers in California, running through some of the most valuable and well known agricultural land in the state. The river winds its way past world-class vineyards and wineries from Calistoga to St. Helena to Yountville and through Napa on its way to San Pablo Bay.

Significant flooding every 5-10 years has been a problem for decades.  All the local governments, as well as the environmental community, grape growers, wineries, downtown businesses and affected residents had opinions about how to handle flood control.  And so did the Army Corps of Engineers, the federal agency authorized in 1965 to lead the effort. What everyone knew was that, to be successful, any work involving the Napa River had to be a collective effort — and it would need funding from federal, state and local sources.

How to raise the local share of the money? And how to reduce flood risks without resorting to concrete and rock-lined levees? That’s how the Army Corps of Engineers typically deals with flood control projects. But the people of Napa wanted to reduce flooding and enhance the habitat for fish, birds—and people—at the same time. They wanted a new and better way.

So they created the Living River concept. They would use logs and living trees –not just concrete floodwalls—to support river banks. They would improve a “bypass” area that is only wet during high river flows. The rest of year, it would be a park with hiking and biking trails. From the Napa River’s north county origin to the wetlands in the south, they would make the river less prone to flooding and enhance the habitat, too. And they would put a half-cent sales tax increase, Measure A, on the ballot in 1998 to provide the local funding for 20 years.

A tall order – but they did it, and now they are seeing the benefits in the City of Napa and throughout the valley floor.  With nearly $400 million worth of bridge relocations, flood plain terracing, channel widening, natural bank stabilizations, and floodwalls completed, the Napa Creek and Oxbow Bypass elements are fully functional.

Downtown Napa has been removed from FEMA flood plain mapping - spurring a redevelopment renaissance.  Once avoided in favor of trendy up valley destinations, the downtown has experienced private investment exceeding $1 billion in hotels, shops, restaurants, and, of course, tasting rooms.  A true success story – and one of which Napa County and all its residents are very proud.