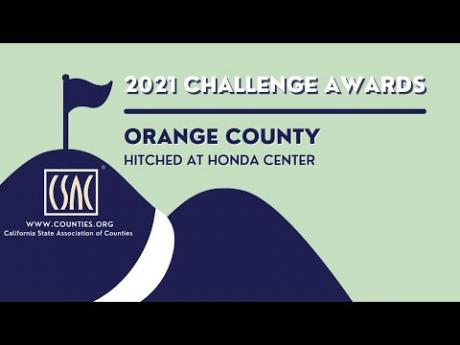 “If you build it, they will come.”  It’s a famous movie misquote we have all heard numerous times. But never did we think it would represent an innovative idea created during the COVID-19 pandemic when the state was shuttered at a time when county services still needed to be provided.

But that’s exactly what happened in Orange County when the County Clerk-Recorder’s Office was faced with the challenge of how to continue performing marriage ceremonies while protecting the health of both staff and the public.

Despite the ongoing spread of COVID-19, the demand for marriage services was still in high demand. For many residents, delaying marriage until the pandemic ended was not an option. Getting married was a necessity in order to add a spouse to health insurance coverage or to secure other needed benefits obtainable through marriage.

The county moved quickly to secure space in the Honda Center’s expansive parking lot, and portable ticket booths from the Orange County Fair were placed on site. The City of Anaheim provided power for on-site equipment.

The end result? The program affectionately became known as “Hitched at Honda Center” was born.

“We did what we had to do just to stay open,” Nguyen says. “And we’re proud of what we did to serve the public.”

The day after it’s their first press conference announcing the novel plan, the County received more than 10,000 phone calls. Between April and July 2020, the county was fulfilling an average of 180 appointments a day with marriage licenses and ceremonies.

The fact that staff were working in ticket booths eliminated direct contact with the public they were serving, ensuring the health and safety of everyone involved. When the program was later moved into the Honda Center’s box office, safety precautions were continued in order to reduce contact between staff and customers.

Word quickly spread well beyond county borders about the County’s innovative program to continue providing marriage ceremonies.  Throughout the rest of 2020, Hitched at Honda Center not only served thousands of Orange County residents, but also couples from throughout Southern California, as well as other states and even countries.

The statistics are truly stunning.  Through this temporary program, the County issues nearly 17,000 marriage licenses and performed close to 11,000 ceremonies.

Many couples dressed up in traditional ceremonial attire for the day, and wore themed masks. Each couple was allowed one witness, who often served multiple roles, including videographer, photographer and bouquet holder. Wedding attendees stayed in their cars during the ceremony, often honking and blinking their headlights after the celebrated kiss.

“It was nice to see the joy still there. They were making the best out of the situation,” remembers Angel Estrada, a Supervisor with the Clerk-Recorder’s Office.

“Sometimes it was hard not to get emotional,” adds Office Specialist Anya Sarinana with a smile.

Despite the ceremony taking place in a parking lot outside a ticket booth, a festive atmosphere was created. And as Clerk-Recorder Nguyen would say, “Love was in the air.”

That’s why the Orange County’s Hitched at Honda Center program was a recipient of CSAC’s 2021 California Counties Innovation Award – only one of three presented to counties throughout the entire Golden State for developing and implementing creative, effective programs.

David Liebler is the retired Director of Public Affairs & Member Services for the California State Association of Counties (CSAC).