Q and A With Second Vice President Ed Valenzuela 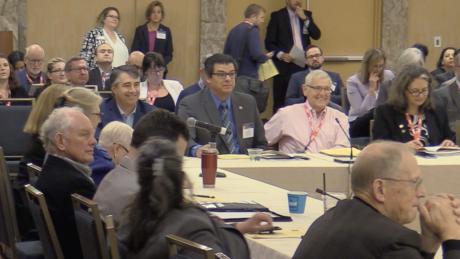 An AT+T lineman for more than 30 years before entering public service, Mr. Valenzuela would attend city council meetings in his telecom territory to immerse himself in local issues. He did a brief stint on Mount Shasta’s Planning Commission and eight years on the Mount Shasta City Council before running for Supervisor, where he’s currently running for his fourth term. Mr. Valenzuela says his lineman role set him up for success as an elected official because it provided the opportunity to meet all kinds of people and form a broad perspective on needs and issues.

“As a Supervisor and as a lineman, helping all sorts of people stay connected is a big part of the job requirement,” said Valenzuela. “At AT +T it was more a matter of keeping equipment working properly.  It is my job as a Supervisor to ensure my constituents stay educated and informed on local issues. But there are certainly similarities between both careers as far as working with people and communicating with them.”

Supervisor Valenzuela became involved with CSAC after his first term as Supervisor. He has served as a Board Member, Treasurer, and Executive Committee Member and is now part of the officer team as Second Vice President.

“As a representative of a rural county, I know we face the same issues as urban counties, just on a different scale. When it comes to issues like homelessness, wildfire, even drought ,smaller counties sometimes have the advantage of being able to make changes more readily,” said Supervisor Valenzuela. “Ultimately, I see my role within CSAC as always making sure that rural counties get their fair share and are well represented within the organization.”

In an effort to dig a little deeper into what drives and motivates Supervisor Valenzuela, we asked some other, more lighthearted questions. His responses follow.

Q: Who is your hero?
A: Abraham Lincoln. He provided strong leadership at a time when our country was dealing with incredible issues, and I admire his dedication.

Q: What fun, historical facts should we know about Siskiyou County?
A: Siskiyou County was heavily impacted by the gold rush and continues to maintain a strong spirit of independence. These two factors came together in the 1941 Original State of Jefferson succession movement emblem: a  gold pan with two Xs to signify a double cross, which currently resides in the Siskiyou County Museum.

Q: What are you currently reading?
A: 42 Faith: The Rest of the Jackie Robinson Story by Ed Henry.

Q: What’s your favorite movie of all time?
A: (With zero hesitation) Casablanca

Q: What’s your proudest accomplishment?
A: It’s hard to pick just one thing. I’m incredibly proud of my successful 32 marriage, our two children, my 30+ year career with AT+T, being elected to City Council on the first try and my role as Supervisor. I am incredibly fortunate and blessed.

Q: What motivates you to work hard?
A: As I outlined in my previous answer, I have been fortunate and blessed in my life and my career. I am motivated by the struggles of others, and I am always working to make things just a little bit better.

Q: Is your glass half-full, or half-empty.
A: Half-full for sure. I think you have to be an optimist to survive in politics!