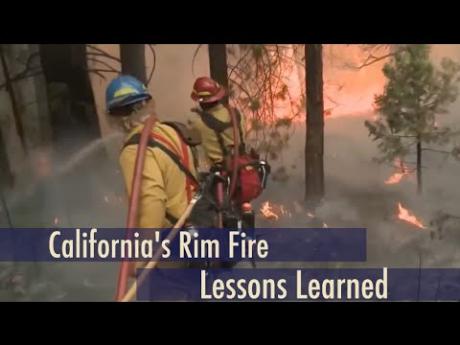 Mile after mile, along the mountain roads of Tuolumne County, the bus wound past stands of charred trees, a lunar landscape just starting to show a few spots of green—the first signs of recovery amid the devastation.

As we all know, the Rim Fire was the largest fire California has ever seen –burning much of the natural beauty found in Tuolumne County and its surrounding areas. A little over a year later, Tuolumne County Alliance for Resources and Environment, Inc.  (TuCARE) offered a chance to see the devastated area after the monumental disaster, so I grabbed my camera and hopped on the tour bus.

Through a camera’s lens you are a bit removed from what you’re seeing – it is like having nose-bleed seats at a concert – you end up watching the megascreen suspended above the band, not the tiny figures on stage. At first the Rim Fire tour was like that – I would zoom or pan my camera around, shooting swaths of scorched earth or clusters of dead, blackened trees, not really taking in what I was seeing.

It was only when I tried to fit a whole section of burnt forest in one shot and found that I couldn’t get everything in the frame did it hit me. Lowering my camera, I took in my surroundings for the first time and I finally began to realize how massive of a loss California suffered.

That is what the Rim Fire was – a loss. Everything lost – the wildlife, the habitat, the industry, the tourists – everything and everyone lost out. But as Tuolumne County Supervisor Randy Hanvelt explained to me in this blog’s accompanying video, “Everything wins in a well-managed forest.”

This is the second disaster I have covered in my short time at CSAC. I have had the unique experience of interviewing disaster responders, county leaders, private industry partners, victims, and volunteer workers. I’ve asked them what they have learned from their various experiences – and they all say the same thing: You cannot stop a natural disaster from happening – earthquakes, fires, storms, floods – but what you can do is be proactive and prepare yourself, your county, and your community. As Supervisor Hanvelt says in the video, “Don’t be sitting there thinking it isn’t going to happen to me.”