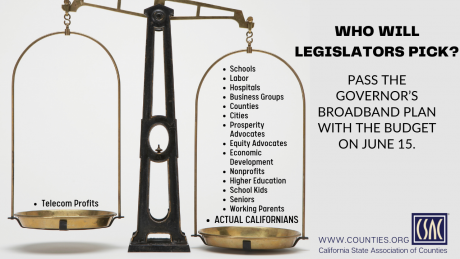 As a former State Assembly Member and current Monterey County Supervisor, I am urging Lawmakers to lift the thin veil hiding telecom’s opposition to including Governor Newsom’s broadband proposal in the June state budget.

Incumbent broadband providers, more than any other group, are responsible for California’s digital divide and they’ll stop at nothing to protect their monopolies, putting profit over people yet again.

Governor Newsom’s $7 billion broadband budget investment is public infrastructure for public good. Dedicating $4 billion of this package to create a statewide open access middle mile network is the only long-term solution to universal access and affordability that will bridge the digital divide and connect California.

Opponents only call it overbuilding to stop other companies from coming in to service those areas. Existing broadband providers are clinging tooth and nail to their local monopolies at the cost of equity, education, healthcare access and economic opportunity for families and disadvantaged populations.

To make matters worse, broadband providers have largely stopped building out to new communities, and are ending service to existing communities. Due to the location of their proprietary middle mile networks, large telecoms are positioned to benefit directly from Governor Newsom’s proposed $2 billion investment in the CASF program. However, that’s a drop in the bucket compared to what they will rake in by preserving their local broadband monopolies. The existing broadband providers would rather see California’s children rely on fast food WiFi service for their education than risk their lucrative local monopolies.

California, it’s time to open our eyes to what’s really at play here. Telecoms and cable companies are opposing all of the most important bills seeking to bridge the digital divide.  It’s time to value people over profits. Much like all levels of government invested in transportation and electrical infrastructure in the 20th century, we must invest in the infrastructure of the 21st century to serve all Californians.

County Of The Week: Santa Clara