Under the Dome: A Former Senator Returns

There I was again, on the California State Senate floor – talking and shaking hands with senators and staff members as they worked feverishly on Thursday of the last week of the 2017 session to act on hundreds of bills which needed to be addressed before the Friday, September 15 midnight deadline.

Only this time, I was on the “outside looking in” as to what the vote count will be on a bill, not as the voting state senator that I was while representing the 15th District from 1996-2004.  Today, I’m a Santa Cruz County Supervisor with an equal concern of what the state might do “for us” as well as what it might do “to us” in local government.

Some things never change.  The hallways were jammed with lobbyists 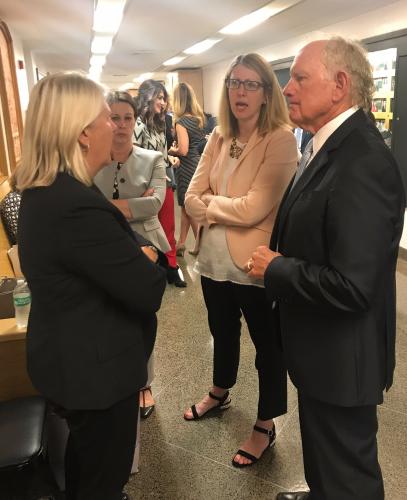 looking at television screens to see which legislation passed or failed, or had not received the necessary votes for passage – in turn being placed “on call” in the author’s hopes that he/she could “work” some of his/her colleagues to come on board to support “the most important bill of the year.”

There was a noticeable, exciting buzz as speeches/pleas were given, pro and con on a variety of legislative proposals, from health care and parks to education and public safety.  They had to wind through one or more of the 21 Senate standing committees, as well as well as some of  the Assembly’s 32 committees to get this far.

It’s a long and tedious process when you consider that more than 2,000 pieces of legislation are introduced each year, some dying in committee and on the floor, or becoming two-year bills, with roughly 800 or 900 being signed by the governor.  And that bill package includes the ever-present practice of last minute amendments that hardly allow much time for in-depth debate.  Thank heavens for the 72-hour rule that says those changes have to be in print for at least three days to become actionable.

This year, I was taking more notice of how the lobbyists or representatives of “special interests” were working to support their causes.  And I can tell you no one does a better job at factually stating their “cause” in all this chaos than our own advocates for the California State Association of Counties.  I could start naming some of them, but I’d need to mention all of them.

Some would say, maybe correctly, that they are at a disadvantage because CSAC doesn’t make contributions to candidates.  Never mind that! What I saw from the “outside looking in” was that our CSAC staff has gained a tremendous respect by supporting our causes based on fact and through their knowledge of the legislative process. CSAC’s legislative team is so effective at representing county interests because they know the issues, the people, and the process—and also because CSAC has worked hard to make sure Legislators and their staffs know the vital role counties play in delivering state programs. That, in turn, is a great reminder to legislators that local governments are the ones who implement the legislation our Senate and Assembly members are about to pass.

I was in Sacramento specifically because of several issues that, in different ways, could impact local authority. AB 1250 would have all but ended county contracting for services; SB 649 would limit local authority over siting wireless telecom equipment and there were also various pieces of legislation that would have limited the expansion of local electric service known as Community Choice Aggregations (CCA). I’m pleased to tell you that AB 1250 and the CCA limits both failed to get out of the Legislature. Unfortunately, SB 649 did get out—and I know CSAC is asking the Governor to veto it.

Bruce McPherson Represents District 5 on the Santa Cruz County Board of Supervisors. He has also served as a California Secretary of State and a State Senator.