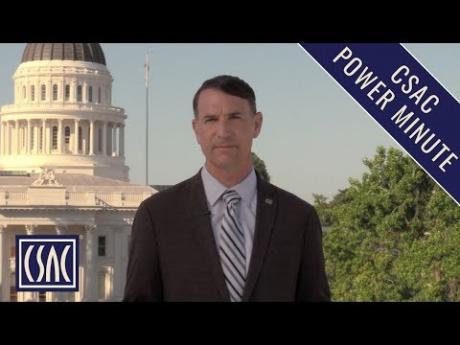 “There is no jurisdiction when it comes to emergency response,” said Governor Gavin Newsom Monday during the inaugural California for All Emergency Management Preparedness Summit. The Governor expressed appreciation for the commitment of more than 550 county, city and state representatives, including elected officials and first responders who attended the summit, co-sponsored by CSAC and The League of California Cities and hosted by the Governor’s Office and the California Office of Emergency Services (Cal OES).

Every California community is vulnerable to disaster in one form or another, and local governments are on the front lines for both immediate and long-term preparedness and response. The summit featured various County leaders who shared their experiences and hard-earned expertise with attendees.

“As front-line providers of essential services, California’s Counties are acutely aware of the long-term impacts that disasters have not only on our residents, but on our infrastructure, our economies and our psyches,” said CSAC President and Humboldt County Supervisor Virginia Bass during lunchtime comments. “The county expertise showcased during the morning panels underscores just how involved California’s counties have been and continue to be in building resilience and preparedness, as well as leading the recovery from catastrophic disasters.”

CSAC Second Vice President and Sonoma County Supervisor James Gore moderated the first panel on Building Resilience and Preparedness that also featured representatives from Ventura County, Tulare County and San Francisco City/County. Whether the disaster is wildfire, earthquake or drought, the three action items from this panel include the importance of using emergency operations centers beyond emergencies to break down silos and build collective impact; testing emergency alert systems before they’re needed; and establishing and maintaining a single point of contact for the community in the event of an emergency.

Carmel Angelo, Chief Executive Officer for Mendocino County, moderated the second panel on Recovering from Catastrophic Disaster, where the idea of recovering being a marathon with a lot of hurdles got a knowing chuckle from the audience. Other lessons learned shared by this panel of experts included coordinating schedules so the county administrator, sheriff and emergency services coordinator aren’t out of the county on the same day, and understanding the unique needs of communities to prioritize what’s best and most important in the recovery process.

The afternoon featured two rounds of breakout sessions where attendees were challenged to work together and identify best practices around topics like enhancing emergency management capacity and individual preparedness; strategies and priorities for risk reduction; and understanding disaster recovery. Governor Newsom returned to the summit in the afternoon to listen in on several of these breakout sessions. Best practices and pain points shared during these sessions were recorded and collected by the moderators to be shared with Cal OES to inform future coordination and planning efforts.

Wrapping up the conference, Cal OES Director Mark Ghilarducci urged attendees to begin integrating disaster recovery into disaster response so the two occur concurrently, rather than consecutively. And in keeping with an ongoing conference theme of working together, he praised the conference for bringing together county, city and state officials to work on these issues, as no one agency or department can respond to a disaster by themselves.

“Wildfire and disaster recovery remain a top legislative priority for CSAC and we thank Governor Newsom for his commitment to this critical issue,” said CSAC Executive Director Graham Knauss. “CSAC was proud to sponsor the summit as collaboration and relationship development between local government and the state is invaluable to continue building a stronger and more resilient California for All.”

Sara Floor is the Communications Manager for the California State Association of Counties.