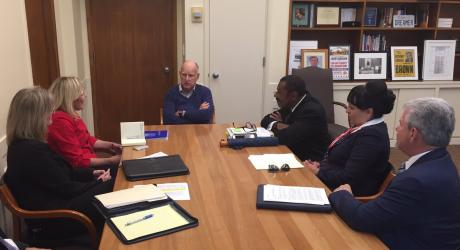 CSAC’s officers met for about an hour with Governor Brown this week, discussing a variety of issues important to counties. Chief among them was the IHSS cost shift. They also touched on the overall state budget, transportation funding and other local issues.

The IHSS issue remains a difficult one. In 2012, the state took on a larger fiscal role in providing In Home Supportive Services. It did so believing that it could save money by coordinating that care with other health services being provided to the same clients. The 2012 “Maintenance of Effort” agreement capped how much money counties would have to contribute to IHSS at the 2012 level, plus an annual inflator.

As a result, counties are looking at a $623 million increase to IHSS costs starting July 1 and that will grow to more than $1 billion within six years. The Governor listened and understood the message from CSAC Officers regarding the potential impacts to other county programs. The dialogue remains open and CSAC is hopeful that we can come to a mutually agreeable resolution that mitigates the impact on county budgets.

Overall, CSAC’s partnership with the Governor remains solid, and is indicative of the collaborative nature of the relationship between the State and California’s 58 counties. CSAC looks forward to working with the Governor and his staff on the State Budget, transportation funding and other critical issues of mutual concern.