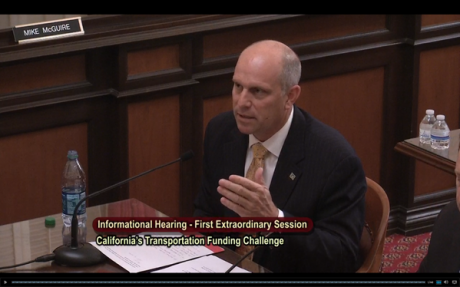 The California State Senate kicked off its special session on transportation funding today with a three-hour hearing that included testimony from CSAC President Vito Chiesa. The Stanislaus County Supervisor noted that while most people agree that there is a large backlog of nearly $140 billion over 10 years in deferred maintenance on both the local and state roadway systems, there is not yet agreement on how to address it.

However, Supervisor Chiesa noted in his testimony that focus groups and polling among California voters have found a preference for making relatively small increases in several revenue sources as opposed to one large one. “Local governments agree with this logic,” said Supervisor Chiesa. “And CSAC and the League of California Cities support a broad array of potential solutions similar to what’s in Senator Beall’s SB 16, including:

Supervisor Chiesa also testified to the need to allocate any new revenue fairly between local governments and the State. “We have historically shared gas tax revenues between state and local transportation systems,” he said. “Similarly, revenues generated at the local level are also shared and invested into the state highway system, local roads, and transit. This approach makes sense: people who pay the tax drive on both state and local facilities; they might not even know when they are traveling on a locally owned expressway or state-owned surface road. People want a reliable roadway network that works for both local trips—including those taken on foot, bike or bus—and long-distance or regional travel on state highways.”

San Jose Mayor Sam Liccardo also testified on the need for additional investment in local streets and roads and urged the committee to think about highways and local roads as a comprehensive system. The State Assembly is holding a similar hearing for the special session on transportation issues on Monday, July 6 at 1:30 p.m.

County Of The Week: Plumas