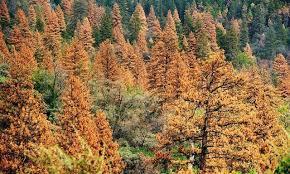 There are approximately 29 million dead and dying trees in California forests. Dealing with them is going to be a major issue for at least a decade. CSAC conducted a regional meeting in Shasta County this week, focusing on the dramatic death of millions of trees due to bark beetle infestation. The problem is huge—involving hundreds of thousands of acres up and down the Sierra Nevada.

“I think people have to see it to believe it,” said CSAC President and Amador County Supervisor Richard Forster. ”And once they see these maps with the tree mortality documented by county, then they really see the impact of it statewide. It’s a catastrophic situation. There are many counties that are approaching 20, 30, 40 percent tree mortality, and it touches nearly every county in the state of California.”

Mariposa County is one of the hardest hit areas in the state and Supervisor Kevin Cann, a former deputy administrator for the U.S. Park Service in Yosemite, says this is literally hitting people where they live. “They call it the ‘WUI zone.’ The Wildland-Urban Interface, where we really like to have our houses in the middle of these forests and it’s a great place to live until you have a species die-off like this that no one could see coming.”

There is an immediate safety need to remove trees that threaten to fall on people and property and there are millions of tons of dead trees that need to be disposed of. Forestry experts say some of it might be salvageable as lumber, but the beetle-killed trees deteriorate much faster than other timber. Utilities are already cutting some trees that could fall on power lines and other infrastructure but there is no way to remove all the dead trees and the fear is that this summer, thousands of acres of standing dead trees could erupt into a fire storm like we have not seen before.

Supervisor Cann says while the Sierra forests are seeing an immediate impact from tree mortality, the whole state will also eventually feel the downstream impacts because so much of the state’s water supply falls in the mountains as rain and snow. “These watersheds are of vital importance to all of California for our way of life so even if I lived on the coast, I’d be very concerned about the Sierra Nevada watersheds.” A healthy forest acts as a filter for water that runs downstream. It’s unclear at this point what impact the death of so many trees will have on water quality.

CSAC’s regional meeting brought together representatives from about a dozen counties, plus individuals from the US Forest Service and CalFire. The consensus is that while the problem is huge, there are some steps we can take to begin to manage it, starting with removing dead trees that threaten roads, homes and other infrastructure, and deciding on some ways to dispose of them all. The Governor formed a Tree Mortality Task Force to begin making these decisions. CSAC and several individual counties are participating in that process.

A CalFire representative at the meeting said the Governor has not made a final decision about asking the federal government for an emergency declaration. That would make more deal dollars available to address the variety of problems caused by dead and dying trees. CSAC President Forster said the real need now is to continue collaborating and communicating about the issue and that was the real value of getting people together for the Regional Meeting.

“These people will talk about it with other Supervisors and elected officials,” President Forster said. “Everyone here will get it out to the communities so that our constituents and residents of the state see the impact.”