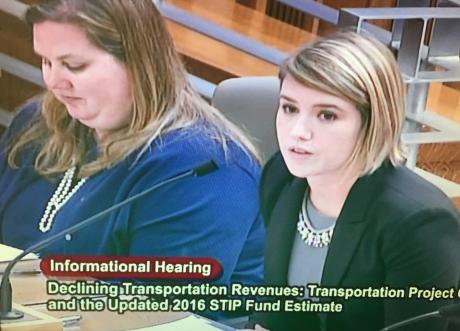 Testimony from CSAC and the League of California Cities focused on the “forgotten forty-four percent” of the price-based excise tax: the share for city and county roads. Counties and cities have seen this revenue source decrease by roughly eighty percent since its peak in fiscal year 2013-14. The result has been increased deferred maintenance, reduced matching funds for projects with federal funds, and decreases in basic road maintenance services, such as filling potholes, cleaning drains and culverts, and trimming trees and other vegetation. When bad weather hits, the cumulative impact of these reductions can result in public health and safety issues, such as those CSAC recently investigated in Trinity County.

The Board of Equalization is poised to reduce the excise rate by about two cents at its meeting beginning on Tuesday in Culver City. CSAC has continued to advocate for the implementation of smoothing measures that will partially mitigate the revenue reductions in the coming year, but real solutions require new revenues, not just improved cash flow. Accordingly, CSAC and our coalition partners continue to press for a solution that will result in at least $3 billion in new annual revenue for local street and roads. We urge counties to reach out to their legislators to share the local impacts of our declining transportation revenues and to push for new funding now.