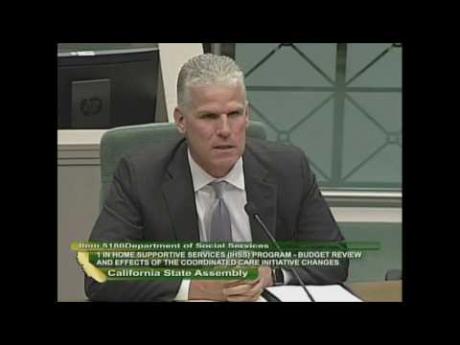 Continuing on last week’s initial budget discussions in the Senate, this week Assembly Budget Subcommittee No. 1 discussed the unwinding of the Coordinated Care Initiative and the In-Home Supportive Services (IHSS) Maintenance of Effort (MOE).

CSAC Executive Director Matt Cate testified Wednesday before the Assembly Budget Subcommittee No. 1 on the dire impacts counties will be facing on July 1 as the state shifts more than $620 million in IHSS costs to counties. Cate explained to the Subcommittee that the “$623 million has hit us in the face, and I cannot say that we are at terms with it. It feels too large for us to be able to handle and it will take years to be able to deal with that even in the current year.”

He further explained that not all counties have recovered from the recession and that many counties have seen their property tax revenues decline since 2008, impacting their ability to respond to this cost shift. Because of counties’ limited resources and the recent  changes to the IHSS program made at the state and federal levels, Cate explained that “it’s been difficult for county supervisors to get their head around the fact that the program has not only grown, but in ways the county didn’t control over these last five years. And that’s going to be true in the future. Those points make it very difficult as focus on homelessness and mental health and public safety reforms, and all the things that you’ve asked us to implement. We need proper funding to be able to do it.”

Subcommittee Chair Arambula postponed a vote on a proposal to mitigate the financial impacts to counties until March 22. This proposal would re-establish the IHSS County MOE and create a new state special fund to provide supplemental funding to counties to mitigate the gap between the cost shift and 1991 Realignment revenues until Realignment revenues exceed the new level of MOE costs. The proposal would also shift the responsibility for collective bargaining of wages and benefits for IHSS providers from counties to the state. Additional details on the proposal can be found in the agenda for yesterday’s hearing, starting on page 13. During his testimony, Cate stressed that CSAC remains “interested in all ideas around smoothing around ways to mitigate…and we remain open minded.”

For more information on the unwinding of the CCI and IHSS MOE, and the impacts counties will face, please visit the CSAC website.