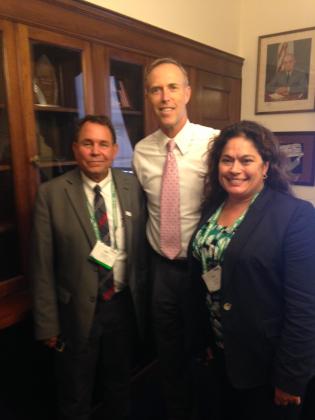 Following a brief albeit busy two-week legislative session, House and Senate leaders adjourned their respective chamber of Congress on September 18 to allow members sufficient time to campaign for the upcoming midterm elections. As expected, lawmakers focused primarily on the need to prevent another government shutdown while considering language authorizing the president to use military force against the ISIS terrorist group in Syria. Aside from several additional legislative matters, Republicans and Democrats alike used their brief time in Washington to reinforce their parties’ contrasting election themes.

On September 17, the House approved a short-term continuing resolution (CR) authorizing the extension of federal spending into the new fiscal year, which begins on October 1. Specifically, the legislation (HJ Res 124) provides funding for federal agencies, operations, and spending programs at current (fiscal year 2014) levels through December 11, 2014. In a separate vote, lawmakers also approved language that would provide the Obama administration with temporary authority to train and equip Syrian rebels in the fight against ISIS. It should be noted that lawmakers expect to have a more extensive debate about the use of military force following the November elections.

For its part, the Senate easily cleared HJ Res 124 on September 18. President Obama is expected to sign the stopgap spending measure into law in the coming days.

While the CR generally continues status quo funding for federal programs, the measure includes several extraneous provisions, or anomalies. For example, the legislation reauthorizes the Export-Import (Ex-Im) Bank through June 30, 2015. The Ex-Im Bank, which backs foreign loans to buy U.S. goods, has come under intense scrutiny from conservative lawmakers who view it as a form of corporate welfare. On the other hand, supporters of the Bank argue that it helps boost the country’s competitiveness in otherwise difficult-to-access foreign markets.

Additionally, the CR provides $88 million in new funding to combat the Ebola outbreak in West Africa, as well as increased funds for disability-claims processing at the Department of Veterans Affairs. Of particular interest to counties, the legislation would temporarily extend (through December 11) a law that prevents local governments from taxing broadband internet access. The current moratorium was set to expire on November 1, 2014.

Following the November elections, members of Congress will return to Capitol Hill for what is expected to be a brief lame duck session. At that time, lawmakers will need to either extend the CR into next year or negotiate the terms of a catch-all omnibus spending package. The outcome of the elections – particularly whether Republicans are able to win back the Senate – will likely drive what happens with the budget and other issues during the lame duck.

In other news, the House on September 18 passed a catch-all jobs package – the Jobs for America Act (HR 4) – which combines 14 bills that have previously been approved by the lower chamber. Among other things, the measure would modify the regulatory rulemaking process and make permanent a number of business tax breaks. It also includes a permanent extension of the aforementioned moratorium on Internet access taxes, as well as a forestry component that would, among other things, address the expiration of the Secure Rural Schools program.

It should be noted that neither of the aforementioned measures is expected to pass the Senate.

Waters of the U.S.

On September 9, the House approved legislation (HR 5078) that would block the EPA and the Army Corps of Engineers (Corps) from developing, finalizing, or adopting regulations expanding the scope of federal jurisdiction under the Clean Water Act (CWA). The bill is an attempt to prevent the Obama administration from implementing its controversial “Waters of the U.S.” rule, which was issued on April 21, 2014. Notably, 35 Democrats joined nearly every House Republican in voting for the legislation.

In addition to preventing EPA and the Corps from advancing the aforementioned proposed rule, HR 5078 would require the agencies to consult with relevant state and local officials to develop recommendations for a regulatory proposal that would identify the scope of waters covered – and not covered – under the CWA. The bill also would require the agencies to provide for public review and comment of a draft report, but only if consensus has been reached with regard to a recommendation among the Army Corps, EPA, and state and local officials.

According to EPA, the pending Waters of the U.S. rule would not protect bodies of water that have not historically been covered under the CWA and merely clarifies which waterways and wetlands are under federal jurisdiction. Critics of the proposal, however, including many state and local governments and agricultural interests, contend that the rule would vastly expand federal regulatory oversight and permitting requirements, resulting in unnecessary delays to both public works projects and private development.

Congressional opponents of the proposal are eying the post-election lame duck session of Congress in which to further their attempts to block the rule. House Republicans, for example, are hoping to attach a policy rider to a potential fiscal year 2015 omnibus spending package in order to prohibit the Corps and EPA from spending any funds to implement the rule. Incidentally, two House spending bills – the fiscal year 2015 Interior Appropriations bill (HR 5171) and the fiscal year 2015 Energy & Water spending legislation (HR 4923) – include such a funding prohibition.
Payments-in-lieu-of-Taxes (PILT)

In other developments, the National Association of Counties (NACo) held a Washington, D.C. PILT fly-in during the week of September 15. Traveling to the nation’s capital to advocate for the continuation of program funding were a number of county officials from across the nation, including Trinity County Supervisor Judy Morris, and Inyo County Supervisor Matt Kingsley. (Pictured at right with Congressman Jared Huffman) San Bernardino County Supervisor Robert Lovingood also joined the NACo contingent in a series of meetings on Capitol Hill. County officials also had meetings with key representatives of the Obama administration, including officials from the Department of Agriculture and the Department of the Interior.

It should be noted that fiscal year 2014 PILT payments (the last round of authorized PILT funds) were distributed to counties in late June. Although the fiscal year 2015 House Interior and Environment appropriations bill would provide an additional year of program funding, Congress has not finalized a new budget. Accordingly, the future of the PILT program, and therefore program funding to counties, remains uncertain.

In addition to PILT, county officials urged members of Congress to provide another year of funding for the now expired Secure Rural Schools (SRS) program. Like PILT, final SRS payments were distributed to counties earlier this year.

On a related matter, Representatives Jaime Herrera Beutler (R-WA) and Joe Garcia (D-FL) are circulating a Dear Colleague letter urging House leaders to provide funding for PILT and SRS in fiscal year 2015. California county officials are urged to contact their member(s) of Congress to request that they sign on to the Dear Colleague. It should be noted that the Herrera Beutler-Garcia letter is consistent with a similar request from CSAC to the California congressional delegation.