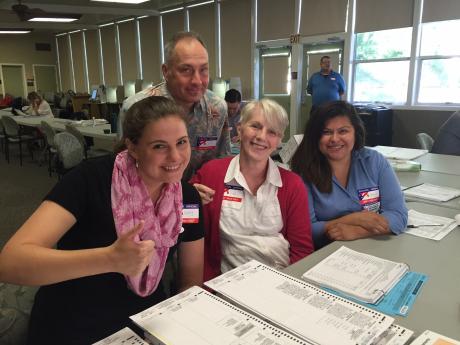 The June 7 primary election is now history—and while some votes are still being counted, and some close races will continue on in November, counties report that the election came off very smoothly even with last minute voter registrations and millions of vote by mail ballots pouring in this year.

“Overall, things went very well,” according to Neal Kelley, Orange County’s Registrar of Voters and President of the California Association of Clerks and Election Officials. “We know we can expect some issues to crop up in any statewide California election. (We have) 17 million voters and the volume we are dealing with is one of the things to consider. That being said, the stories today are about the contests and the candidates, which is what we like to see.  No systemic or major issues to report.”

Some minor issues were reported, including a car that crashed into a church that was serving as a polling place in Shasta County. But even that issue was resolved quickly simply by moving the polling place into another room of the same building. The crash was determined to be an accident, completely unrelated to the election.

The number of new voters registering—as late as 15 days prior to the election—may have caused some issues. Some voters who had registered recently may have been asked to use a provisional ballot, or, in some cases, their registration status could be verified by contacting the Registrar for that County. But Kelley says in most cases counties handled the new voters without issue. He also says there has been a “seismic shift” in the way Californians are voting.

“Vote by mail has topped 70 percent of the ballots cast, so that relieves pressure from the polling places, which allows for smoother operations overall.  However, I will add that I think it is well past the time for us to explore significant reforms in the process of election administration. For instance, the centuries old tradition of community based voting should be modernized to adapt to the changing habits of voters. Vote centers are a good example.” Some counties have used larger, more regional voting centers to replace several smaller neighborhood polling places.

Kelley also notes that while many California Counties are using voting systems designed and built 20 years ago or more, they are going to have to make it through the General Election. “I think everyone is gearing up for a large turnout in November as the energy around this presidential election cycle continues to grow. Counties are prepared for November, however, many will face significant changes as we approach the 2018 elections and many systems will need replacing. Funding of new systems will be top of mind as we head into 2017 in addition to the potential for vote centers here in California.”