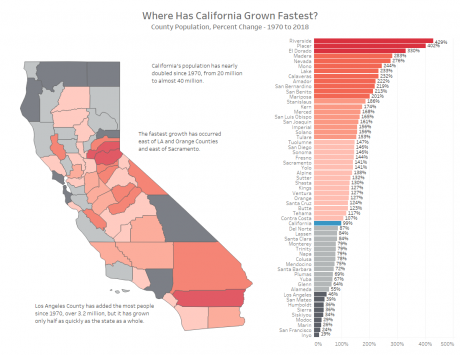 California’s population has nearly doubled since 1970, growing from a sliver under 20 million to a skosh under 40 million. So where are we?

Mostly, we’re in southern California. Los Angeles County has over 3.2 million of the new recruits, while San Diego and Riverside have each added almost 2 million people. Orange County is right behind at 1.8 million and San Bernardino rounds out the top five at 1.5 million. Altogether, that’s more than half of the 20 million-person increase.

It’s not surprising that these large urban areas have gained the most people, but which areas have grown the fastest?

In general, counties on a freeway within an hour of major job centers have grown faster than anywhere else in the state. This primarily includes the Inland Empire, the Sierra foothills, and the northern Central Valley.

Two of these counties stand out: Riverside and Placer. In 1970, fewer than half a million people lived in all of Riverside County’s 7,243 square miles. Since then, the county population has more than quintupled. Placer County has done the same, but from a smaller starting point of about 77,000.

On the other end of the chart are most of the Bay Area (especially San Francisco and Marin), Los Angeles, and some counties that are harder to reach from the population centers, like Inyo, Modoc, Sierra, and Siskiyou. In part, the slower growth over this period is a reflection of the fact that these urban counties were already developed in 1970. No doubt other factors have also affected their growth rates.

As California grapples with its housing crisis, we will have to decide whether to continue the de facto policy of the past 50 years and build more homes where they’re cheaper but farther from jobs, or increase density in the nearer, but dearer, urban cores.