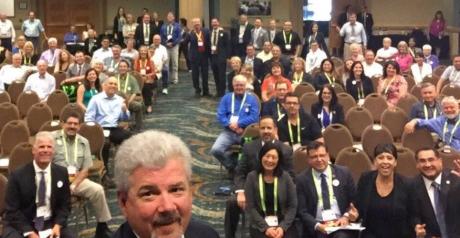 NACo’s four-day Annual Conference in Los Angeles County had a great turnout this year with nearly 3,000 elected and appointed county officials from across the country in attendance. California county officials and CSAC staff participated in several panel discussions on a wide range of topics including negotiating intergovernmental agreements with tribal governments, lessons learned from California’s drought, Ventura County’s Foster Health Link Program, and the Pew-MacArthur Results First Initiative to name a few.

Conference topics mirrored the wide range of issues and responsibilities counties now face in an increasingly complex world. Attendees participated in sessions that examined ways to combat human trafficking; deal with the public health threat from the Zika virus; reduce the number of mentally ill in jails; protect employees and citizens from active shooters; and manage data in strategic, meaningful ways.

NACo’s policy committees also discussed, debated and adopted dozens of proposed platform changes and new policy positions, many of which were ultimately adopted by NACo delegates at the annual business meeting. The platform changes will be added to NACo’s American County Platform which is the association’s permanent policy document that reflects the philosophy and overall objectives of NACo’s membership. The adopted policy resolutions will provide NACo staff with direction until next year’s annual meeting.

CSAC staff worked with California county members of the NACo policy committees to ensure that proposed platform changes and resolutions were not contrary to the interests of California’s counties. For example, CSAC was successful in adding language to the transportation resolution on FAA reauthorization principles to include a statement opposing the potential loss of sales tax revenues resulting from a 2014 FAA ruling. In addition, the CSAC and Orange County co-sponsored resolution regarding the incidental take of migratory birds was also adopted by the NACo delegates. The resolution urges the U.S. Fish and Wildlife Service (USFWS) to address local government as separate sector in the proposed Migratory Bird Treaty Act Incidental Take Permit rulemaking. It also directs NACo to support minimizing the regulatory costs to local government in acknowledgment of public health and safety functions.

CSAC also joined with County Welfare Directors Association of California and Supervisor Don Knabe in successfully co-sponsoring an emergency resolution that directs NACo to urge Congress to amend the Family First Prevention Services Act so that it would not shift increased costs to states and counties by denying Title IV-E eligibility to children who would remain eligible for state or county-funded foster care and adoption assistance.

The approved platform changes and resolutions along with the workshop materials and recordings are expected to be available on the NACo_Website by next week.