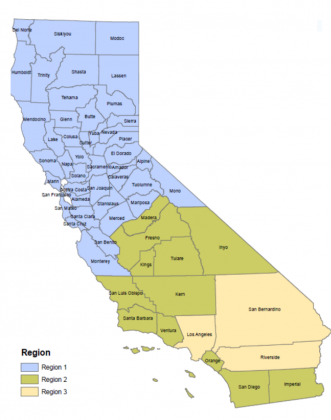 In an effort to improve CalPERS’ competitiveness in the healthcare market and increase premium stability, the CalPERS Board of Administration (Board) voted to adopt a new, three-region healthcare model to take effect January 1, 2020. The new pricing system, according to CalPERS staff analysis, is an improvement from the current system, achieving greater marketability, premium stability, and administrative ease.

While the actual premium impact will remain unknown until after the 2020 Rate Development Process, counties that contract with CalPERS for healthcare benefits should be cognizant of this change and how it might affect their budgets moving forward.

CalPERS began regionally adjusting healthcare premiums in 2005. This pricing convention applies only to public agencies and schools (not the State) with a goal of ensuring premiums that are in alignment with geographic costs of health care. The methodology used to create the current five regions has not been revisited since 2005; therefore, the CalPERS health team initiated a year-long evaluation of the program which has consisted of stakeholder feedback, actuarial consulting services, and multiple presentations at Board meetings.

Ultimately, the Board adopted staff’s recommendation to reduce the number of regions from the current five down to three. The regions will be called Region 1, Region 2, and Region 3, and will be divided along county lines, with borders drawn between northern California and two sections of southern California, as shown in the map.

The change is intended to accomplish increased premium stability since the regions are larger and have higher populations. Additionally, the change is expected to bring premiums into closer alignment with the actual cost of care in each geographic area.

Further details are provided in the health team’s analysis and PowerPoint. They also provide a cost relativity chart that shows where individual counties stack up compared to the statewide average. Please feel free to contact Tracy Sullivan, CSAC Legislative Analyst, with any questions.