Pothole Politics: We Rally at the State Capitol 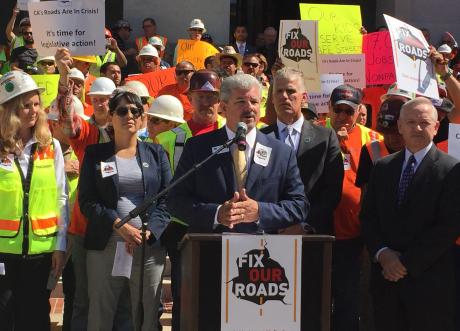 CSAC and the Fix Our Roads Coalition held a rally and news conference on the steps of the State Capitol Thursday to announce a new “Roadmap to Consensus” on transportation reforms and funding and to urge the Legislature to act to move the issue forward. Together, the state highway and local street and road systems have a backlog of $137 billion in deferred maintenance over the next 10 years.

“How many of you had to dodge a pothole, or ride over a rickety bridge to get here today?” CSAC Executive Director Matt Cate asked the crowd of several hundred people. “It’s been a year since the Governor called a Special Session on transportation. It turns out it hasn’t been so special, because while a few legislators are calling for action, everyone else is sitting on their hands.” You can watch a video of the whole rally and press conference here.

The roadmap is a compilation of ideas that have been put forward by Senator Jim Beall, Assemblyman Jim Frazier, Governor Brown, and Republicans in both houses. The Roadmap would return all existing transportation dollars currently being diverted for other purposes to transportation projects; includes thirteen reform, streamlining and accountability measures that Republicans have said they need to see in any deal; and would provide for modest tax increases across a variety of sources. “We’ve taken the best ideas from all parties, from both sides of the aisle and put them into one package that provides some new revenue and reinstates some revenue for transportation, and has the guarantees and reforms to make sure the money is spent wisely,” said Cate.

CSAC President, Amador County Supervisor Richard Forster noted that this is a bi-partisan issue. “Amador County is a fairly conservative county, but in 2015, our Board voted unanimously to support the Governor’s package that included a gas tax increase. That’s how important it is to us. It’s the right thing to do, and I can tell you from talking to my constituents, the noise level is going up because people are getting tired of the condition of the roads.”

CSAC Second Vice President, Leticia Perez, noted that her Kern County, as a huge producer of agricultural products and renewable energy, needs better roads. “This work is done mostly on rural roads through rural parts of Kern County—over 8,200 square miles. The impact of bad roads to the workers, the impact to people trying to move goods to the market cannot be overstated. This is a disaster.”

The rally included a large contingent from various labor organizations as well as business leaders and local governments. The speeches were interspersed with loud chanting and cheering—especially when at one point Senator Beall and Senate President Pro Tempore Kevin De Leon appeared on a balcony above the crowd.

CSAC’s Legislative Team, and the Coalition partners still have their work cut out for them to move this issue through the process, but Will Kempton, Executive Director of Transportation California and a long-time transportation advocate said sometimes making a little noise can help. “If they didn’t hear what happened here today, somebody’s deaf—I have to say, this was a tremendous rally. You know, we have to implement reforms, there’s no question we have to make the program more efficient but we also need more revenue to spend on the huge demand we have.”

Kempton said the Roads in California are in the worst shape since the 1950s—before the interstate highways system was built.