NACo’s 82nd Annual Conference and Exposition drew approximately 1,500 county officials and staff from across the country to Franklin County, Ohio.  The conference, which ended on July 24, provided a valuable opportunity for county officials to network, as well as share information and best practices with their colleagues from every corner of the United States.

Keynote speakers included USDA Secretary Sonny Perdue; Piper Kerman, whose autobiography inspired the popular Netflix series Orange is the New Black; and, Lou Dobbs, anchor of the Lou Dobbs Tonight show on the Fox Business Network. County officials also heard from two NASA officials who discussed the future of space travel. Rounding out the group of distinguished speakers was Ed Viesturs, who is the only American to have climbed the world’s 14 highest peaks without supplemental oxygen. 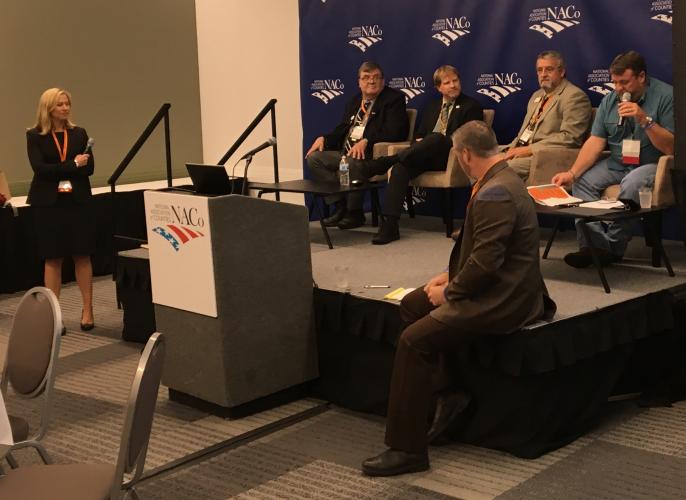 For their part, California county officials and CSAC staff participated in a number of panel discussions and workshops, including a CSAC-organized roundtable discussion on the implementation and regulation of cannabis laws at the local level. The panel, which was moderated by Sonoma County Supervisor James Gore and CSAC’s Cara Martinson, featured comments from Humboldt County Supervisor Rex Bohn, Lincoln County (Oregon) Commissioner Bill Hall, Kittitas County (Washington) Commissioner Obie O’Brien, and Rob Bovett from the Association of Oregon Counties. There was also a town hall and special exhibit focused on the opioid epidemic, as well as a summit on early childhood development and several forums that highlighted successful county resilience strategies.

NACo’s policy committees discussed and debated dozens of proposed platform changes and new policy positions, many of which were ultimately adopted. The platform changes will be added to NACo’s American County Platform, which is the Association’s permanent policy document that reflects the philosophy and overall objectives of NACo’s membership. The adopted policy resolutions will provide NACo staff with direction until next year’s annual meeting. CSAC staff worked with California county members on each of the NACo policy committees to ensure that proposed platform changes and resolutions were not contrary to the interests of California’s counties.