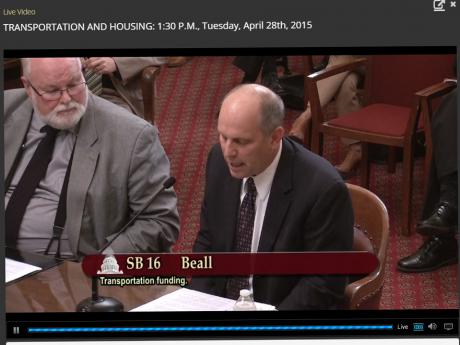 On April 28 the Senate Transportation and Housing Committee passed Senator Beall’s SB 16, which would raise approximately $3.5 billion per year for state and local transportation programs over a five-year period. Six Democrats voted in favor of the bill, one Republican voted no, and four members of the committee—two Democrats and two Republicans—did not cast a vote. One of the two non-voting Republican members, Senator Cannella, expressed concerns that the funding package may need to be more ambitious. A difficult political process awaits SB 16, which requires two-thirds approval from both houses of the Legislature. SB 16 will next be heard in the Senate Governance and Finance Committee on Wednesday, May 6

CSAC President and Stanislaus County Supervisor, Vito Chiesa was a lead witness at the hearing and testified on behalf of counties. Pursuant to longstanding CSAC policy and reaffirmation by the CSAC Executive Committee and Board of Directors, CSAC has offered our strong support to Senator Beall’s proposal. CSAC appreciates the Senator’s comprehensive efforts to address short-term transportation funding needs. SB 16 meets all of CSAC’s criteria for new sources of transportation revenue: it takes a statewide approach; funding would be distributed equitably between the state and locals and amongst counties; funds would be for maintenance and preservation of the existing roadway system; and all users of the system, including zero emissions vehicles that do not currently pay gas taxes at the pump, would contribute.

According to the committee analysis, SB 16 would raise between $3.5 billion and $3.9 billion per year over a five-year period, with the vast majority of the funding dedicated for maintenance and rehabilitation of state highways and local streets and roads. Specifically, SB 16 would:


The revenues from the gas tax increase, 10 cents of the diesel tax increase, and both registration fees would be deposited into a new maintenance and rehabilitation fund. From this account, Senator Beall’s plan would dedicate 5 percent of total revenues generated to a State-Local Partnership Program to incentivize additional local sales tax measures passed after July 1, 2015. The remaining 95 percent of revenues would be shared equally between the state and local governments, with a fifty-fifty split between cities and counties. CSAC estimates that counties would receive approximately $3.5 billion in additional revenue over the five year program. The bill has a phased-in approach that is expected to raise $665 million for counties in the first year and $855 million in the fifth year of the program.

On the Assembly side, specific legislative language for the funding proposal announced by Speaker Atkins earlier this year has yet to be released. The Speaker’s plan would reportedly impose a user fee on vehicles, raising approximately $2 billion per year and helping California decouple road and highway maintenance funding from the increasingly unsustainable gas tax. CSAC understands that the Speaker’s proposal may move through the budget process. CSAC has worked with the proponents of both of these much-needed transportation funding proposals and is prepared to engage as the two packages come together.

County Of The Week: Nevada