We’re in a Drought Folks 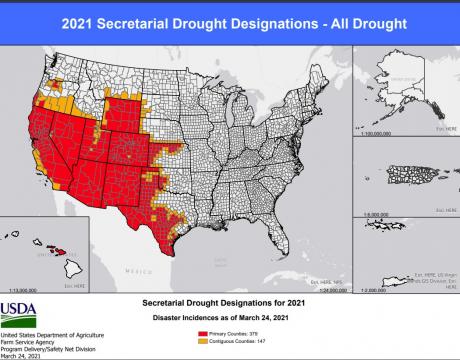 Well county folks, it is official, California counties are heading into a drought year. Northern California has about 51 percent of average precipitation for this time of year; statewide average snowpack levels are at 63 percent of average. This CSAC bulletin outlines the current state and federal water status including crop loss declarations, water rights notices, and state and federal water project announcements.

On the federal side, the Bureau of Reclamation announced an update to the initial Central Valley Project 2021 water supply allocation for agricultural water service contractors south-of-Delta. After an initial allocation of 5 percent, it is likely that this will be reduced. Water supply updates will be made as appropriate and posted here.

On the state side, the Department of Water Resources (DWR) announced an adjustment to its initial State Water Project (SWP) allocation for the 2021 water year. The department now expects to deliver 5 percent of requested supplies this year, down from the initial allocation of 10 percent announced in December. The severity of the situation is particularly evident in the North State. The Feather River watershed, which feeds into Lake Oroville, has seen significantly less precipitation this year than normal and is on track for its second driest year on record. Following a below-average 2020 water year, California’s major reservoirs are at 50 percent of capacity.

Looking on the bright side, California is better prepared for drought than in the past. Following the 2012-2016 drought, state and local officials implemented many programs focused on managing the state’s water through strategic, integrated approaches with a strong emphasis on water use efficiency and conservation. The state continues to provide assistance and tools to local water agencies through the Water Use and Efficiency Branch (WUE) to help them reduce their drought vulnerability.

CSAC plans to continue to work with local, state, and federal water agencies as we navigate forward through this dry year. For information on current water conditions at the state’s largest reservoirs and weather stations, visit the California Data Exchange Center website.