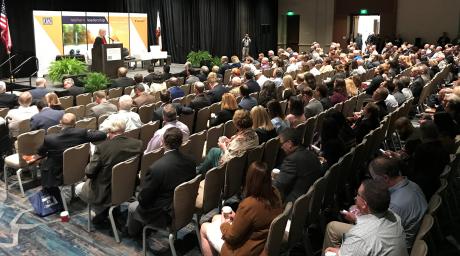 More than 800 county officials and private-sector partners attended a week’s worth of activities during the 124th CSAC Annual Meeting held last week in San Diego County.  Activities began on Sunday with the kick-off of the CSAC New Supervisors Institute and wrapped up on Friday morning with the final meetings held by CSAC’s affiliate associations.

A highlight of the conference was the election of CSAC’s officers for the coming year:

“Each of the 2019 CSAC officers exemplifies the trait of resiliency and embodies the principles of integrity, teamwork and adaptability. I am excited to work side by side with these talented and experienced leaders as we move forward into the new year,” said CSAC Executive Director Graham Knaus. “Even with positive news about the state budget, we know that there are many challenges ahead for California’s counties. Working together in Sacramento and in Washington, D.C., our 2019 officers will serve California’s 58 counties and nearly 40 million residents well.”

The conference provided county officials with a head start on learning more about the issues that promise to be top legislative priorities for the new Legislature and Governor.

Workshops focused on such significant topics such as homelessness and housing, the recent election, and ethics. Attendees were also treated to an off-site workshop at the San Diego County Emergency Operations Center, where county emergency managers discussed a challenging and ever-changing environment.

Supervisors had the opportunity to attend a variety of meetings to learn about – and discuss – key county issues and priorities. These included the 2020 Census, bail reform, housing funding, In-Home Support Services and building safer communities. CSAC’s five policy committees and board of directors all met during the conference.

Attendees heard from Stanford Professor Robb Willer, whose research focuses on the social and psychological forces that shape American political attitudes. A celebration of the 10th Anniversary of the CSAC Institute for Excellence in County Government, which has trained thousands of county officials, was also held.

WLF also hosted a workshop on economic empowerment that focused on the steps that have been taken, and need to be taken, to ensure economic empowerment for women.  At the workshop attendees heard from an impressive group of women, including Senator Connie Leyva, Assembly Member Lorena Gonzalez Fletcher, Cassandra Walker Pye. Each of these women shared information about how they were able to overcome the gender gap to become prominent leaders in their communities. The workshop provided attendees with valuable information to take back to their counties.

Throughout the conference, the Association honored a number of state and county officials for their outstanding service. You can learn more about these individuals here.