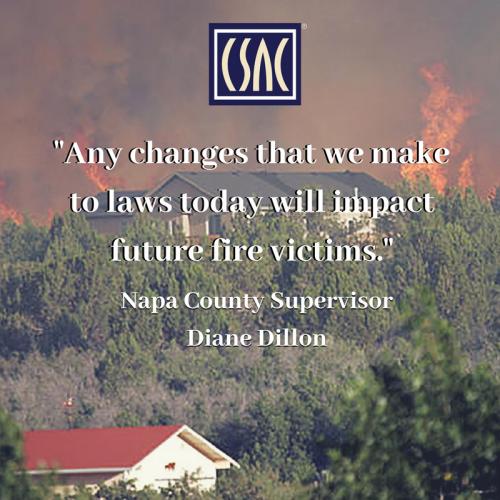 The Joint Legislative Conference Committee on Wildfire Preparedness and Response held its third hearing today, focusing on inverse condemnation and utility wildfire liability. The four-hour hearing at the State Capitol was packed with representatives from the various parties advocating on both sides of the issue.

“Fires continue to burn in California, and we must remember that any changes that we make to laws today will impact future fire victims,” she told the Committee, which also heard from other local government representatives, as well as wildfire survivors, the insurance industry, consumer advocates, employee unions and utilities.

The Conference Committee first met July 25 and held its second meeting this past Tuesday on Utility safety, and with three week remaining in the legislative session, the clock is ticking to come to resolution.

At today’s hearing, Supervisor Dillon addressed the concerns local government has with the Governor’s proposal that would alter the constitutionally protected inverse condemnation process by providing legal protection for utilities. Supervisor Dillon’s comments were supported by, among others, Yountville Mayor John Dunbar, representing the League of California Cities; Tubbs Fire survivor Patrick McCallum, representing the grassroots organization Up from Ashes.

“The Governor’s proposal will ask the court to balance the benefit of electricity to someone’s house burning down. I ask you, how can that be done? How is that fair to victims? We believe this is a very radical policy change. This proposal will shift liability to communities that are trying to recover,” Supervisor Dillon said.

Local government counsels concluded this week that the Governor’s proposal on inverse condemnation is “likely unconstitutional.”  A written opinion prepared by counsel representing CSAC, RCRC and the League of California Cities was distributed to legislators.

“The Governor’s proposal would fundamentally change the nature of the constitutional protection against property damage provided through inverse condemnation, and would reduce or deny compensation in circumstances where the California Constitution, as interpreted by the courts, requires full compensation,” the opinion reads.

On Wednesday, CSAC staff and county officials met with members of the Conference Committee as well as with Administration staff to express concerns over any proposed changes to inverse condemnation.

“We are focused on solutions. We want to increase safety, protect ratepayers and ensure for a reliable and fiscally solvent electricity system. But, this must not come at the expense of fire victims and our communities.”

For more information on inverse condemnation and impacts of any changes, visit the CSAC Website here.