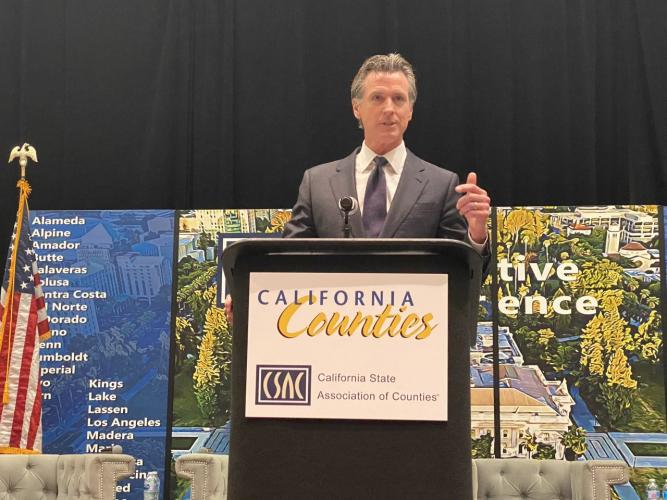 Due to the pandemic, it was CSAC’s first in-person Legislative Conference since 2019. Over two days, attendees had an opportunity to participate in nearly 25 major sessions, workshops, meetings and networking events. Presenter materials and presentations will be available online Monday for those who could not attend the conference in person.

Gov. Newsom headlined the Opening Session Wednesday morning, touching on a wide range of issues in an informal “state of the state” address. And while the Governor highlighted that California’s economy is growing and the state’s fiscal health has never been stronger, he also talked about how actions taken by the state and counties during the pandemic had a significant positive impact on the health of Californians.

“Tens of thousands of people are alive today because of the approach you took,” he told the room of county leaders. He ended his remarks by telling the crowd, “You’ve done a great job. I’m proud of this state. I’m proud of CSAC.”

Wednesday’s luncheon program featured Attorney General Bonta, who focused on the need for ongoing collaboration among state and local law enforcement agencies that are tackling a wide variety of issues, ranging from illegal weapons and the opioid epidemic to organized retail theft and consumer protection.

The Attorney General also touched on the “historic” $26 billion opioid settlement that will result in approximately $2 billion to California. He also pledged to have open discussions with CSAC on issues critical to California Counties.

“We’re going to make sure our counties are safer and healthier,” the Attorney General said. “We have shared goals, shared values.”

Attendees were also treated to a roundtable discussion among CSAC officers on Wednesday. A common theme during the presentation by President Ed Valenzuela, First Vice President Chuck Washington and Second Vice President Bruce Gibson was the value of not only getting involved in the Association, but also taking advantage of the numerous continuing education courses offered by the CSAC William “Bill” Chiat Institute for Excellence in County Government.

Thursday morning featured a breakfast workshop with Secretary of State Dr. Weber and Senate President pro Tem Atkins, who focused on “Shattering the Glass Ceiling: Significant Firsts in California Women’s History.” In an inspirational discussion, both Dr. Weber and Senator Atkins talked about the importance of women helping each other, not only when they enter political office, but as their careers move forward in public service.

While the Secretary and Senate President pro Tem are both trailblazers in their own right, the pair told the overflowing crowd that they, too, are trailblazers as an increasing number of women hold public office.  The inspiring workshop drew the largest crowd ever to attend an event hosted by Women’s Leadership Forum.

During the conference, registrants also heard from a variety of state and local experts in workshops focusing on “Counties and Cannabis: How to Move Forward in 2022,” and “CalAIM and County Budgets: What Supervisors Need to Know.” CSAC’s five policy committees and Board of Directors also met, providing county leaders an opportunity to discuss key CSAC priorities and policy issues.

We wish to thank the county supervisors, county administrators, and county staff who attended as well as our sponsoring Corporate Partners and myriad speakers who accepted the invitation to join this important county gathering.