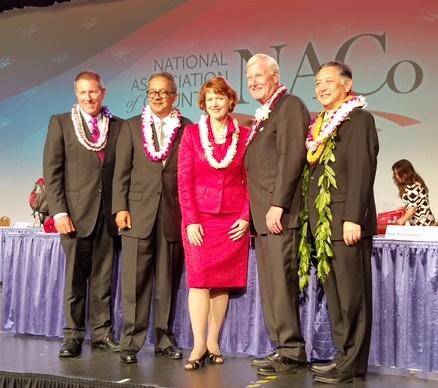 San Diego County Supervisor Greg Cox today was elected as Second Vice President of the National Association of Counties (NACo), a post that will directly lead to him serving as President of the organization and shaping national policy discussion on critical issues. Supervisor Cox was elected Monday at the 81st Annual NACo Conference and Exposition, held in Long Beach.

“I’m deeply honored and appreciative of the opportunity to take on this new challenge,” said Supervisor Cox.“No level of government impacts people more directly than county government and I strongly believe that it is critical for local government voices to be heard at the national level.”

Supervisor Cox has served in numerous leadership roles with both NACo and the California State Association of Counties, where he is a past President. He has served in local government for more than four decades. His broad experience led to his appointments to the San Diego Regional Airport Authority, the California Coastal Commission and the National Ocean Council’s Governance Coordinating Committee; a group that advises the President on ocean policy issues.

In his new role, Supervisor Cox will take ideas that have worked well in San Diego to a national level, including 2-1-1 San Diego, the County’s Live Well San Diego initiative and successful efforts to help veterans. “Counties work every day with governments, community groups and the private sector to make a difference in our communities, and I want to see that counties also make a very real difference in setting the national agenda,” he said. You can see more of Supervisor’s Cox’s platform here.

Cox was reelected to a sixth and final term on the San Diego Board of Supervisors in last month’s primary election.