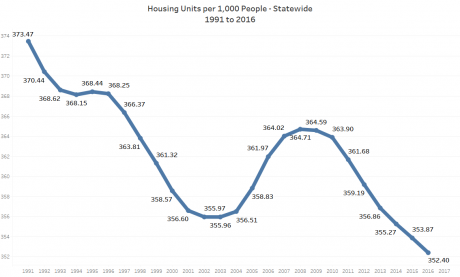 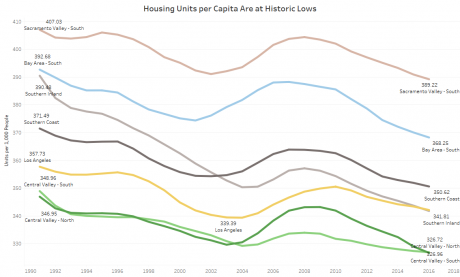 Remember musical chairs, that staple of childhood birthday parties? All the kids walk around a bunch of chairs and when the adult stops the music everybody sits down. Except that there aren’t enough chairs and whoever is left standing is out. Then another chair is taken away and the whole thing starts over until only one kid is left.

It turns out our parents were teaching us an important lesson about the California housing market.

As the charts here show, the state’s supply of housing units per capita has been on the decline for most of the last 25 years, both statewide and in all of the heavily populated regions. (In less populated regions, the high number of seasonal and vacation homes buck the trend.)

That only leaves about 342 housing units for every 345 households. Musical chairs, anyone?

The numbers underscore both the importance and the difficulty of increasing the housing supply, as policymakers at both the state and local levels have been struggling to do in recent years. But that’s another lesson we can take from our parents: just because it’s hard doesn’t mean we can give up.

For an interactive version of the chart showing changes on the regional level, visit our Tableau Public page.

Housing unit and population data come from the California Department of Finance official estimates for 2016. Average household size and vacant housing units come from the US Census Bureau estimates.