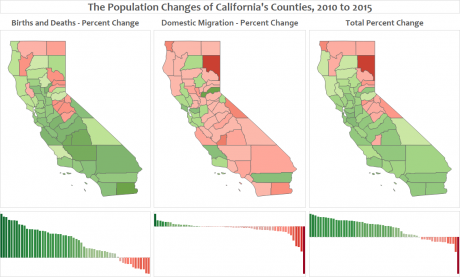 The new population numbers are out, giving us an update on where people live in California. We dove a little deeper into the numbers, produced by the California Department of Finance, to see not only where people live, but also whether the changes over the last five years are due to birth and death rates or to domestic migration.

What we find is that, from 2010 to 2015, births are positive in most counties, but strongest from the Imperial up through the Sacramento Valleys and lowest in many of the foothill counties and up north.

Put the two together and you have Santa Clara leading growth at just over 7%. Right behind it are Alameda, San Francisco, Riverside, Contra Costa, and Placer. Lassen County has seen the biggest drop since 2010 (-11.2%), followed by Del Norte (-4.6%)