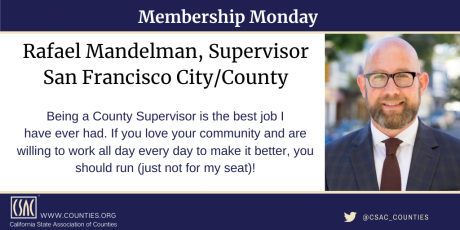 What makes your county special?

San Francisco is the only combined City and County in California. It is also a place that has long captured the imaginations of people around the world, a favorite movie location from Hitchcock to the Avengers. San Francisco has been at the center of some of the great social movements of the last half century and our local government has led on issues ranging from LGBT rights to tenant and worker protections to climate change. From the Gold Rush until today, it has been a city where people have come to make their fortunes, pursue their dreams and change the world.

Is your glass half-full, or half-empty?

I am a glass half-full pessimist, or maybe a glass half-empty optimist. I am naturally a pretty happy person; grateful for the opportunities I have been given and hopeful that the future can be better. But as an elected official, although it is certainly part of my job to lift up and celebrate things that are working, I think the more important part of my job to identify what’s wrong and try to fix it.

What motivated you to enter public service?

As far back as I can remember, I have always been interested in politics and public service. I was a history nerd in high school, and public problems always seemed more interesting to me than private ones. In college I got a work-study job with the local community development department. After college, I earned concurrent degrees in law and public policy, and then went on to work as a lawyer representing local governments. In my free time, I plunged into San Francisco’s civic and political life, served on City commissions, and eventually ran for office.

Who is your hero?

My grandmother came to the United States a Jewish refugee from post-war Europe. The Nazis had killed her husband, her parents and several siblings. She had saved her son, my father, who she brought with her across the Atlantic Ocean to Troy, New York and then to San Francisco. Starting from nothing, having survived unspeakable loss, she built a new life for herself and her son here. My grandmother was the strongest person I have ever known, a survivor in every sense of the word.

What motivates you to work hard?

There is so much work to do. San Francisco is a great city and county, with great natural and financial resources. But we also have long struggled with a number of vexing policy challenges, even before the pandemic, from homelessness to drug addiction to our housing shortage to rising income inequality. I am keenly aware that my time on the Board of Supervisors is limited, and every minute counts.