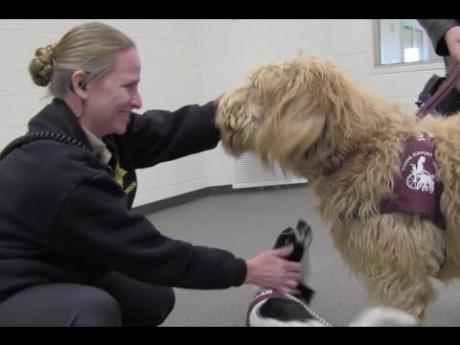 Despite being surrounded by a dozen people talking and moving around, Humu – a 2-year-old butterscotch labradoodle – lies motionless on the floor. It’s not that Humu doesn’t have a care in the world; he’s just been trained as a service dog – and that training began at the Southwest Juvenile Hall in Riverside County. Near him a young, small black and white dog named PJ scampers around, anxious to see everyone in the room and oblivious to any commands cast his way. PJ is awaiting training that will soon begin at the hands of the one of juveniles housed at the facility.

It’s all part of a canine training program developed by Riverside County in conjunction with a local nonprofit organization. It’s a program where not only the dogs learn a lot but the juvenile offenders charged with their training do as well.