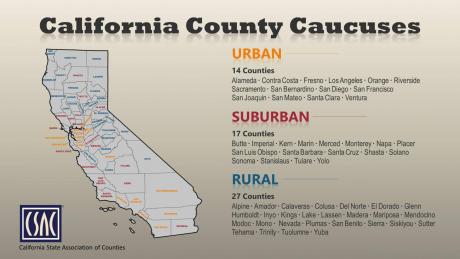 The primary purpose of CSAC is to represent county government before the California Legislature, administrative agencies and the federal government. CSAC places a strong emphasis on educating the public about the value and need for county programs and services.

While California’s 58 counties – ranging from Alpine with a little more than 1,000 people, to Los Angeles with more than 10 million – are diverse, many common issues exist. CSAC’s long-term objective is to significantly improve the fiscal health of all California counties so they can adequately meet the demand for vital public programs and services.

CSAC is proud to represent the counties of California. With continuing member involvement and staff commitment, we are refining and expanding programs and services that will ensure the success of counties well into the future as the closest level of government to the people.

CSAC – More Than a Century of Service to Counties

Since California’s admission to the United States in 1850, county supervisors have met with one another to discuss state and federal legislation. Initially, these meetings were informal and irregular. In 1895, a formal statewide organization called the County Boards of Supervisors Association of California was organized. For the next 16 years, the association held meetings to discuss major issues concerning local government. On May 15, 1911, the Association’s first constitution and by-laws were adopted and the organization has been a strong factor in California policy making ever since. The name was later changed to the County Supervisors Association of California. In 1991, the association again changed its name to the California State Association of Counties (CSAC) to better reflect the broad base of programs and services that counties provide to the public and CSAC provides to counties.

Toward the end of the 1930s, it became increasingly clear to the association’s leadership that a more professional organization was necessary. County government problems demanded solutions which could only be realized by the establishment of a permanent office and staff in Sacramento. In response, the association opened its first offices in Sacramento. Prior to that, it contracted for representation through various local government-based lobbying groups in the Sacramento area.

Today, CSAC’s offices are located one block from the State Capitol at 1100 K Street. Previous locations include the 11th and L Building from 1970 to 1981, and the Elks Building at 11th and J streets.

CSAC has 31 full-time staff members and has an annual operating budget of $8.7 million. All 58 California counties are dues-paying members of the association.

CSAC holds two annual meetings for its membership: the Spring Legislative Conference in Sacramento, which brings between 200-300 county officials to the capital. The Annual Meeting is in November, alternating between Northern and Southern California, with between 700-900 county officials and interested private sector participants in attendance.

CSAC publishes a weekly electronic CSAC Bulletin throughout the year and distributes it to more than 3,500 subscribers in addition to posting on its website. During legislative budget discussions, CSAC publishes a Budget Action Bulletin on an as-needed basis. The Association also keeps its membership apprised of relevant news through a variety of social media tools.

CSAC participates in the Spring and Annual Meetings of the National Association of Counties (NACo) and provides federal resource and membership services in Washington D.C.

The California State Association of Counties (CSAC) shall adhere to the highest professional standards of conduct relying on its character, integrity, ability and strength. To this end, CSAC subscribes equally to the following values and principles:

County Focused – We will be county focused and our policies will be member driven.

Integrity – We will be consistently honest and fair.

The California State Association of Counties (CSAC) serves as the effective advocated and unified voice of California’s 58 Counties.

To serve California Counties by: developing and equipping county leaders to better serve their communities; effectively advocating and partnering with state and federal governments for appropriate policies, laws and funding; and communicating the value of critical work being accomplished by county government.

Click on the map to see an interactive version.

CSAC Headquarters Located a block from the State Capitol