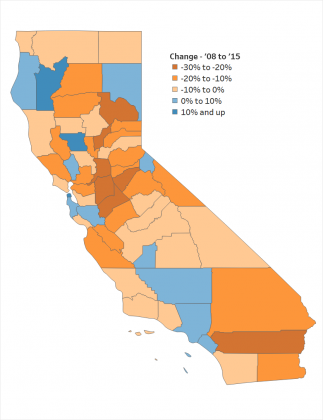 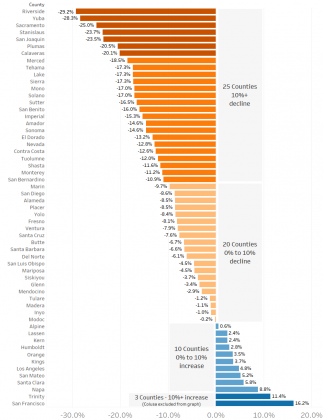 (First in a series exploring California’s uneven recovery and its effects on counties.)

As the California economy continues to grow at a faster pace than the rest of the nation, a new analysis shows that the recovery has been uneven across the state. Not only have some regions fared better than others, but the nature of the recession and the shape of the recovery have affected government revenues differently.

Seven years later, 45 counties in California (78 percent) received less property tax revenue per capita than they did before the recession, after adjusting for inflation. Property tax revenue is particularly important to counties, since they constitute the bulk of most counties’ discretionary funds and therefore are the largest source of funding for public safety and other local services.

The losses are most pronounced in the northern Central Valley, the Sacramento Valley, and the Inland Empire.

Riverside County tops the list per capita, inflation-adjusted property tax revenues 29.2 percent lower than their pre-recession peak. Yuba County is close behind with a decline of 28.3 percent, followed by Sacramento County at 25.0 percent. Other counties with declines of more than 20 percent are Stanislaus, San Joaquin, Plumas, and Calaveras.

In fact, of the 13 counties that have recovered their pre-recession peaks, one has done so because a single major project (a power plant) increased its tax base and two have done so not because their property taxes have grown significantly, but because their populations have declined, causing their “per capita” revenues to appear rosier than they otherwise would.

The reasons for the widespread declines are harder to determine. Certainly one reason is because investors bought so many properties at foreclosure prices, locking in low valuations under the rules put in place by Proposition 13. The long recovery times also point to the extraordinary values many properties reached during the real estate bubble that preceded the recession.

Another reason, however, and one that we’ll explore in future installments in this series, is simply that many areas of the state are not seeing the economic growth that has largely been focused on the southern portion of the Bay Area and the southern coast.

The implications of this uneven recovery are many, but one is that counties are not in a position to bear further cost-shifting and program responsibility from the state. As the statewide economy has improved, state-level revenues have increased. Not very many counties can say the same.