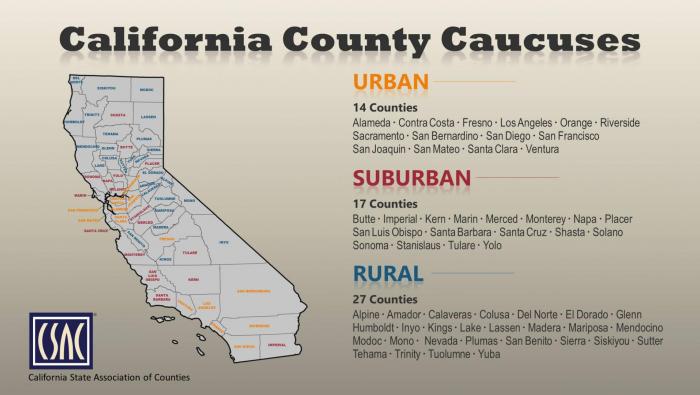 Click on the map to see an interactive version.

CSAC is governed by a 15-member executive committee including the President, First Vice President, Second Vice President and Immediate Past President who are selected by the membership annually and a 62-member board of directors.

The Board delegates day-to-day policy and oversight functions to the Executive Committee, which includes the four annually elected officers and other members selected by each caucus from the Board of Directors.

CSAC Board of Directors — 62 members including: One county supervisor from each of the 58 counties, plus CSAC’s president, two vice presidents and immediate past president.

CSAC also works closely with other statewide associations of county officials. These groups, separate from CSAC, maintain their own governing bodies and structures.

The California State Association of Counties (CSAC) shall adhere to the highest professional standards of conduct relying on its character, integrity, ability and strength. To this end, CSAC subscribes equally to the following values and principles:

County Focused – We will be county focused and our policies will be member driven.

Integrity – We will consistently honest and fair.

CSAC: The Voice of CA Counties

CSAC Headquarters Located a block from the State Capitol