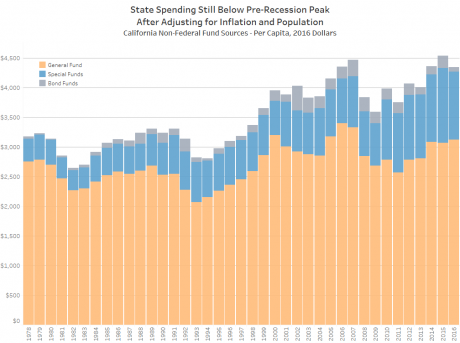 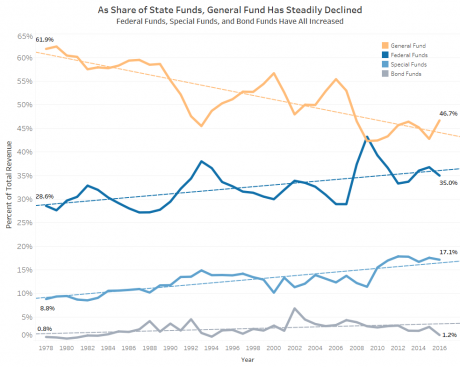 State funds remain below their pre-recession peak, after accounting for inflation and population.

The state’s General Fund, represented by the orange part of the bar, is still below not only the pre-recession peak, but also below 2000-01 levels, the peak before the previous recession. This is partly due to the shift of revenues to special funds, including for 2011 Realignment.

However, the shift from the General Fund to other funds is not limited to the last decade. As shown in the second chart above, the state’s General Fund has been declining as a share of overall funding for decades.

In 1978-79, the General Fund accounted for 61.9 percent of all spending. In 2016-17 it was only 46.7 percent. All other funds–special funds, federal funds, and, to a limited extent, bond funds–now account for a larger share of state funding than they did in the past.

While the effects of this slow change over time are not entirely knowable, it certainly affects funding for public schools (pursuant to the requirements of Proposition 98) and limits the state’s flexibility when responding to fiscal challenges.