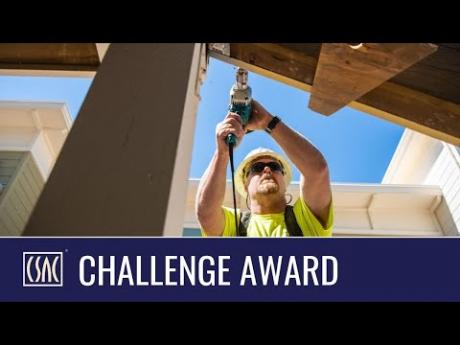 Alameda County resident Shanika Pate and her 14-year-old daughter would drive to a new townhouse development every day and pray outside that their application would be accepted.  And when they received the green light to move, their lives started on a new path.

That 20-unit development, Everett Commons, is just one of results that have come out of Alameda County’s $580-million general obligation bond to combat the local affordable-housing crisis to date. In 2016, that bond – Measure A1 — was approved by 73 percent of the county’s voters. And now that funding is being turned into affordable housing and being used for other programs to assist county residents with their housing needs.

“If this program was not here, I would be miserable – mentally, emotionally and physically,” says Pate, who was previously living in a neighborhood plagued by violence. “I would be in a cycle of just going down, down, down.”

The bond passage allowed the County to provide $25.6 million in emergency funding for nine projects that had hit a financial wall when the low-income housing tax credit market suddenly declined, leaving large, unanticipated financing gaps. That funding “came at a critical time,” explains Michael Johnson, President of UrbanCore Development, which built the 110-unit Coliseum Connections complex that is 50 percent affordable housing. “We were very pleased the county was able to step in and providing the gap funding to make the projects move forward.”

Linda Gardner, Alameda County’s Director of Housing and Community Development, points out that the $25.6 million in emergency gap funding effectively leveraged more than $500 million in financing from other sources.

Charles Mealy is another longtime county resident who now has a roof over his head thanks to a development that benefited from the bond funding. Charles is 81 and a veteran – yet he found himself living out of his truck before Everett Commons was built. “This is a great thing,” he says with a smile as he looks around the complex.

Overall, the bond measure authorizes the development of up to 8,500 rental housing units, including the 2,500 rental housing units that the County has already financed, focusing on the most vulnerable and lower income residents. A number of target populations have been identified for housing, including seniors, low-income youth aging out of the foster care system, and individuals with disabilities.

For County Supervisor Wilma Chan, housing is a basic right. “It doesn’t seem right that in the State of California, which is the sixth largest economy in the world, that we have so many people that can’t be housed,” she says. “Housing is definitely a very high priority for our Board of Supervisors.”

The bond funding has also been earmarked for a number of other housing programs, including assisting low-income homeowners, including seniors, who were able to purchase a home years ago but who lack the income necessary to keep it in good repair or to make accessibility improvements they need to remain safely in their homes,  , and providing down-payment assistance for low- to moderate-income residents who want to become first-time homebuyers in Alameda County.

“We are dedicated to making sure that Measure A1 has the largest, strongest, deepest impact that it can have,” explains Gardner.

And for residents like Shanika Pate, Measure A1 is answering prayers.

This Alameda County program is a recipient of a 2018 CSAC Challenge Award, which spotlights the most innovative programs in county government.
Navigation Term Highlight