Breaking the Cycle of Domestic Violence 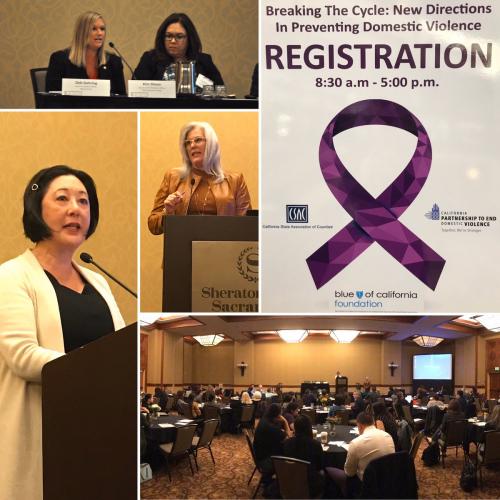 A man, convicted of domestic violence, sat in a batterer intervention program and cried. He had a breakthrough and recounted the abuse he suffered as a child. He told the group a story about how he and his little brother had planned to kill their father to end the abuse. He cried because he was ashamed that he was not able to go through with it and protect his little brother. Violence is a cycle—a cycle that must be broken.

CSAC works closely with a number of counties on the Results First initiative, which helps counties to incorporate the best available research into decisions about program investments. While working on this project, Darby Kernan, who is now our Deputy Director of Legislation, and Amalia Mejia, who is now getting her PhD, discovered that one local program was not yielding the results that it should—the batterer’s intervention program.

In the early 1990s California established a mandatory 52 week domestic violence batterer intervention program for persons placed on probation for domestic violence battery. These classes are paid for by the person taking the class and are conducted by approved batterer intervention providers. In 2012, the Crime and Justice Institute (CJI) released a report that found domestic violence offenders generally have a high rate of recidivism. In fact, studies using direct victim interviews over a period of time estimate repeat violence in the range of 40 to 80 percent of cases.

Given this, CSAC sponsored legislation that became effective in July to allow six counties to make changes to the batterer’s intervention program—Yolo, Napa, Santa Clara, Santa Cruz, San Luis Obispo and Santa Barbara. We were also successful in obtaining grant funding from Blue Shield of California Foundation to cover a series of meetings with the pilots, a statewide batterer’s intervention symposium and an analytical tool to measure the results of the pilot.

Attendees heard from numerous experts in the field of batterer’s intervention, who provided valuable information about what is working and not working. Counties are just a few months in to a three year pilot, and the symposium was the first opportunity in recent years that all of these people were in the same room. We heard over and over again about how great it was to be together sharing ideas. Attendees left thinking about how we can change the status quo.

Personally, I look forward to working with pilot counties, each of which are using different evidence-based interventions, and finding out which approaches are effective in reducing recidivism. I am additionally hopeful that our partnership with Blue Shield will continue and that we can work to bring stakeholders together on a more regular basis.

We are making progress on our plans and the pilot programs are ongoing. While our work is far from being done, we have certainly taken the first steps to break the cycle of violence in California.