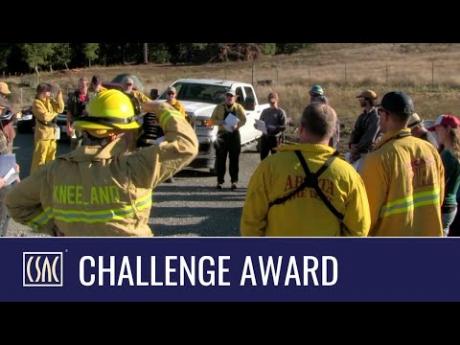 On a crisp and clear morning late last year, around 20 volunteer firefighters, landowners and community members gathered on a plot of land outside of the small rural community of Kneeland in Humboldt County. They listened intently to detailed instructions on how to safely burn 20 acres of private property that gradually rises on a hill before them.  The volunteers gathered to learn how to successfully undertake a prescribed burn. It was all part of the ongoing education and training being conducted by Humboldt County’s Prescribed Burn Association – the first of its kind west of the Rockies.

Lenya Quinn-Davidson and Jeffery Stackhouse, who both work for the UC Cooperative Extension in Humboldt County, developed the program in 2017 and have seen it steadily grow ever since.  The association is comprised of landowners, nonprofits, volunteer firefighters and other community members who work together to carry out prescribed burns on private land. Until the association was created, most landowners and community members had lacked access to prescribed burn information and training.

“Fire is a natural part of California’s landscape. Prescribed fire is a way for us to bring fire back to the landscape as a natural process under controlled conditions. We can choose the weather, we can choose how it’s going to burn,” says Quinn-Davidson. “Private landowners have largely been left out of the fire picture and we realize that is a big part of the problem.”

The goal of the prescribed burn on that October day was to eliminate an invasive type of tree that was overtaking the grassy hill and restore the land to a state where native oaks can thrive once again. The property owners are receiving the same training as the volunteer firefighters on hand.  Beyond eliminating invasive species, the association is utilizing prescribed burns to reduce fuels to prevent future wildfires, as well as restore wildlife habitat. But most importantly, the training and education empowers landowners and others to reconnect with fire as a management tool.

Since the Association was created, it has burned more than 1,000 acres in Humboldt County. The association has also been able to build a strong working relationship with Cal Fire, which also conducts prescribed burns on private lands in Humboldt.

Will Emerson is an Assistant Fire Chief for the volunteer Bell Springs Fire Department in northern Mendocino County. He and his three colleagues made the 2.5-hour trip to participate in the prescribed burn training session in Humboldt County.  He sees the trainings as a “really great experience” for volunteer fire departments, some of which have new trainees who have never worked a fire before.

“It’s excellent training for them — just to get comfortable working with fire,” Emerson says.

The concept of a prescribed burn association is catching on. Quinn-Davidson and Stackhouse have presented the Humboldt County model to numerous counties around the state, and new associations are cropping up around California.

“We use our program to train people, to inspire people, to empower people,” Quinn-Davidson says.

The value of Humboldt County’s Prescribed Burn Association goes beyond the training it provides.  Quinn-Davidson and Stackhouse view the association as a “community cooperative,” bringing together groups that have traditionally been at odds. At any training session you may find volunteers from the ranching or timber industry, environmentalists or cannabis growers.

“Instead of being on opposite sides of an issue, people are gaining understanding for the other side,” Stackhouse says. “It has opened the door for real, honest communication between different groups that otherwise would not be happening. Having people work together who have been on different sides of the community really is amazing.”

Quinn-Davidson agrees. “We are building community and we are using fire as this positive, synergistic thing,” she concludes. “And I feel so positive about it.”

County Of The Week: Sacramento