Kamome: How One Act of Kindness Leads to an Ocean of Opportunity

This is the first blog post in a series highlighting California Counties. In the coming months, learn more about how Del Norte and other California Counties are showcasing the power of international relationships to spur local economic development and education. 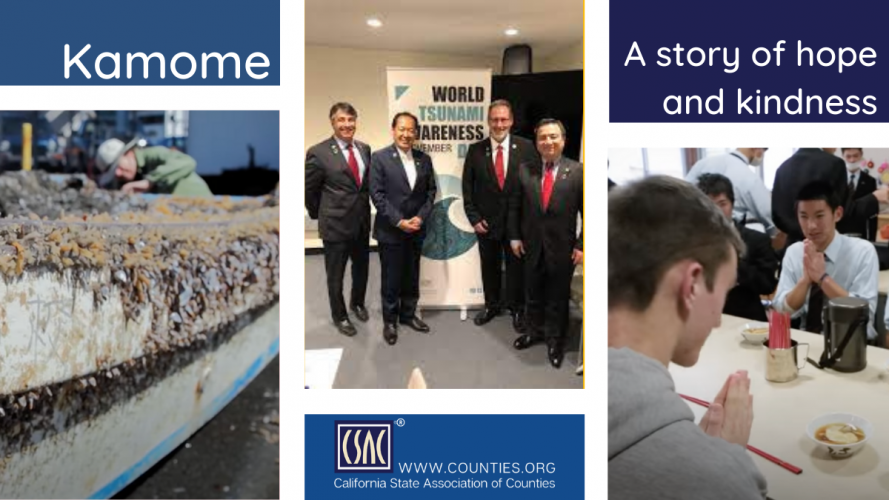 It’s a story of resilience, from tragedy came hope. Who would combine a devasting tsunami, a small boat lost at sea, the Northern California Coast, and the Olympics? As improbable as it sounds, Kamome has permanently connected Del Norte County with a coastal city in Japan, showing one simple act of kindness can spark the most unlikely sequence of events.

Since the 2010 Olympics, NBC Sports has selected a story to highlight the strength of relations between the United States and the country hosting the Olympics. The story of Kamome was selected in 2021. For Del Norte, our story began with the Great East Japan (Tohoku) earthquake and tsunami of March 11, 2011, which most remembered for triggering the Fukushima Nuclear Disaster and the loss of 18,000 Japanese lives, including Americans. But the tsunami that damaged the reactor swept more than five million tons of material into the ocean—including a small boat named “Kamome” that traveled from Rikuzentakata, Japan to Crescent City in Del Norte County, arriving storm-tossed and covered in sea life two years later.

Local authorities were able to connect Kamome with Takata High School in Rikuzentakata Japan, where it was used for marine and harbor science lessons. Upon learning that Takata Highschool would indeed like Kamome returned, Del Norte High School students volunteered to clean up the barnacle-encrusted boat and fundraise for its return. This act of kindness was just the beginning of a lasting relationship between two high schools and two rural communities an ocean away from each other.

Since being elected to the Board of Supervisors in 2014, nothing has quite compared to my first-hand experience with Kamome and the community of Rikuzentakata so fundamentally changed by this event.  I continue to marvel as this small boat’s legacy continues to unfold and develop, creating community change and cultural appreciation between our small coastal towns.

Inspired by the connection between the students and commonalities among their coastal communities, the leaders of Rikuzentakata and Crescent City/Del Norte County pursued official “Sister City” status. Both communities collaborated on the educational curriculum for their schools, empowering women in leadership as well as tsunami awareness programs and emergency response preparedness. More recently, exchanges have focused on economic opportunities, including a variety of joint ventures for local businesses on each side of the ocean.

Ten years following the devastating earthquake and tsunami, Rikuzentakata has largely rebuilt but there’s still an emptiness; an awareness of what used to be. Coastal communities are known for their resilience and steadfastness, and that can be said both for Del Norte County and Rikuzentakata, but for this storybook tale, there are still many chapters yet to be written.

Kamome and the relationship forged between our communities have been life-changing for me, for many in our community, and for our Sister City of Rikuzentakata. The lessons we have learned from Kamome and this heartwarming relationship are driven by our children are worth sharing as many in California struggle with life-changing natural disasters. We look forward to foraging even deeper relations and beneficial ties in the next 10 years and continue to look towards Kamome as a symbol of hope for both our communities.

In case you missed the coverage during the Olympics, watch the NBC Peacock TV Special here and read a book about Kamome and the sister-city relationship between Rikuzentakata and Crescent City here.