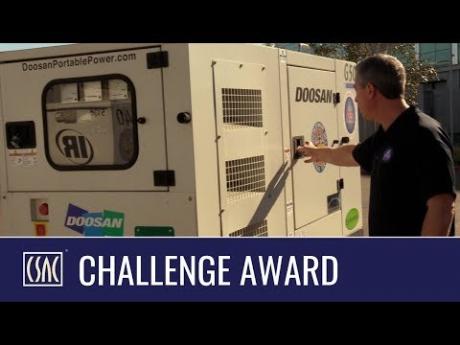 On a hot Thursday afternoon in September 2011, San Diego County was plunged into darkness when a massive power outage hit the region, caused by a grid malfunction across the southwestern United States. The blackout spanned from North County to Coronado and left millions of San Diego County residents without power for over 12 hours.  Power was restored but in the aftermath, County officials learned a lot about the vulnerabilities and gaps in their emergency response plan. One of the unmet needs they identified was how to provide adequate power sources to vulnerable residents who are dependent on home medical devices such as dialysis machines, mobility equipment, and respiratory devices during an extended outage.

“During the [2011 outage] many people who had a medical device that required power showed up at hospital emergency rooms. They didn’t have a medical need, they simply needed to charge their devices,” explains Holly Crawford, Director of San Diego County’s Office of Emergency Services (OES).

“We realized that in the event of any disaster that causes a power outage we are likely to see the same type of thing where people are flooding our emergency rooms and overwhelming our medical system to charge their devices,” Crawford continues.

So the county decided to invest in a “power insurance policy” for residents who are dependent on medical assistance devices by creating a Portable Charging Station Program — the first of its kind in California.  The goal was to create a program that OES could activate when the next big power outage occurs, so they would be prepared to provide power to residents who need it most, including those who require it for life-saving home medical and mobility equipment.

But to make the program work, OES recognized it would take close collaboration with other county agencies, subject matter experts and emergency partners. So OES partnered with the County’s Department of General Services and Health and Human Services Agency, as well as San Diego Gas & Electric, the American Red Cross, and local school districts to assess power needs and build out a deployment and generator maintenance plan. After a year spent conducting field and site assessments, the program launched in 2018 with portable generators pre-staged at county facilities and Red Cross shelter sites across San Diego.

“We worked with a variety of partners with the goal being that we have 14 portable generators that are pre-positioned around the County that can be deployed wherever, whenever needed,” explains Michael Davis, Senior Emergency Services Coordinator and Program Manager.

San Diego County is about the size of the state of Connecticut, so pre-staging the portable generators across the county saves crucial time in the event of a power loss.

“We know there are tens of thousands of residents who have home medical devices in San Diego County,“ notes Crawford. “ We pride ourselves on learning the lessons of events we’ve been through in the past and what we can do now that will make the recovery easier and our community better able to pick up the pieces after the disasters we face.” This forward-thinking program does just that.

California faces a new reality  where disaster risk from earthquakes, wildfires, flooding, and extreme weather all pose a threat, and any one of these events can also result in an extended power outage. So preparing for a power outage has become a critical component of county disaster response and resiliency planning.  With this Portable Charging Station Program, San Diego County built an innovative and nimble model for bringing emergency power where it is critically needed during an extended outage and protecting vulnerable residents.

“This is something other counties could do,” urges Davis. “We are in such a better place now than we were in 2011. If we do have a regional power outage we’re going to be far ahead because of this program.”

This San Diego County program is a recipient of a 2018 CSAC Challenge Award, which spotlights the most innovative programs in county government.