“Been a long time since I rock and rolled.” – Led Zeppelin 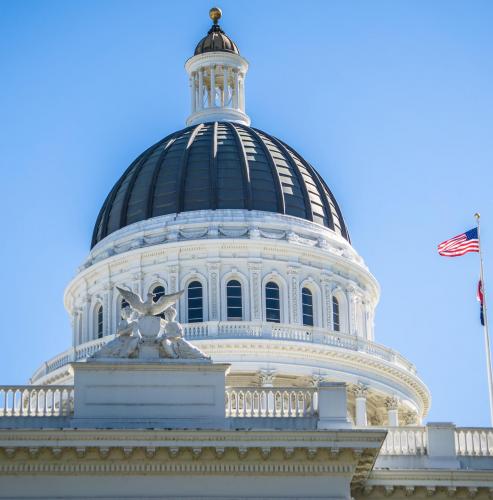 Ever since voters passed Proposition 25 back in 2010, state budgets have been pretty boring. I mean, sure, the Governor wants to save a little more, the Legislature wants to spend a little more, but all differences were resolved fairly easily and it all rolled along like smooth jazz or adult contemporary. Enya, even. This year, though, it’s back to rock ‘n’ roll.

The last nine years have been easy like Sunday morning compared to the roaring raucous budget debates of the previous decade. Multi-billion deficits every year! Tears shed in budget hearings! Mid-year cuts! No budget deal until September! October! November even! Cash shortfalls! Backroom deals! Special sessions! Unilateral furloughs! Long-standing commitments abandoned! No more Williamson Act! No more election funding! Suspended mandates left and right! And of course, dramatic reductions to nearly every thread that together make up the safety net.

Maybe you’ve figured out that those rock ‘n’ roll budget years, while they might have been “exciting” for those of us working in Sacramento, weren’t actually a good thing. Much like an enthusiastic teenager who goes overboard with their rock ‘n’ roll lifestyle, California’s liver has paid dearly for those youthful magic moments of the early 2000s in the forms of increased suffering for those who need help the most, terminated programs, and a wall of government debt that was finally paid off last year. But of course after a decade of rising revenue, the forecast had no particular place to go but down.

On Monday, the Legislature discharged its constitutional duty to pass a budget. But it’s too early to tell if the tune they’re playing is the opening bars of a classical nocturne or just the mellow interlude before the heavy metal riffs kick in. Monday’s action was enough to make sure that legislators will continue to get paid, but no one expects the Governor to sign the budget they passed. So what happens next? One thing that will remain different from those pre-2010 years is that legislative Republicans will remain sidelined, but even with that significant difference, it’s still rock ‘n’ roll to me.

The differences between the Governor’s May Revision and the legislative plan are easy to overstate, but don’t let me be misunderstood, they are there. The Legislature wants to use a few more accounting tricks to reduce cuts as much as possible, while the Governor wants to make sure the state is well-situated for what might turn out to be a long recession. The Governor’s plan hinges on cutting back a little more, spending less of the reserves, and saving some budget tricks in case they’re needed in the near future.

As the saying goes, there are three sides to every story, and in this case there’s something to be said for all perspectives. Sure, the state should live within its means and avoid reckless borrowing, but to what extent, and at what cost? If a few budget tricks can save services that improve the lives of  everyday people who need the most help, isn’t that, when done within reason, one of the core purposes of government? On the other hand, if the recession goes on longer and deeper than many anticipate, cuts would have to be made that are a lot deeper than the groove on a record. One good thing about music, when it hits you, you feel no pain. Real budget cuts though, when they hit, they hit hard.

That’s why CSAC, along with our affiliate organizations and counties up and down the state, are asking for the state to backfill 1991 Realignment and 2011 Realignment, which are projected to fall $3.3 billion short of their base funding over the current year and budget year. The services provided by those funding sources are the ones that people rely on the most, the ones that have been center stage over the past few months: public health, social services, behavioral health, job retraining, public safety, anti-recidivism, and direct medical care, among others.

This is exactly the wrong time to reduce funding for these programs, but that’s what will happen if the state doesn’t provide some kind of assistance. The safety net will fray. Free falling, indeed.

That’s also why the federal government needs to pass additional fiscal relief for states and counties. Unlike Congress, the California Legislature and counties need to pass balanced budgets. Emergencies like the one the country faces right now are the right time for Congress to provide substantial federal aid. Without it, every level of government in California, from elementary schools to health programs, will have to cut even more deeply.

So what will happen next? Well, the Legislature and the Governor will continue to negotiate, hopefully quickly. Many counties have passed budgets in recent days knowing that they’ll have to revisit them later in the summer. But the sooner the state acts, the sooner counties can make any necessary changes.

The next constitutional deadline is July 1, the beginning of the fiscal year, when a budget is supposed to be signed. Through the years of smooth jazz budgets, California has not missed this deadline. But the days of rock ‘n’ roll are back. And like the man said:

“The future’s uncertain and the end is always near.” – The Doors

Geoff Neill is the Legislative Representative in the policy area of Government Finance & Administration.