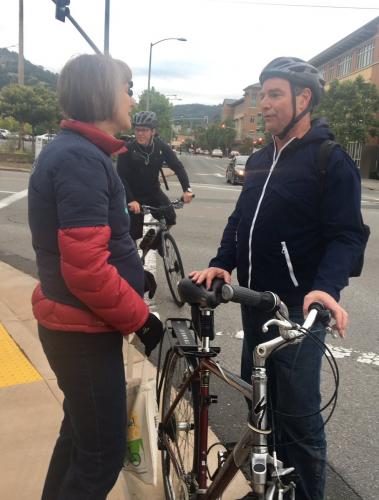 For the second year, I went 30 days without taking a single occupancy car ride.  My goal was to adjust my own transportation habits toward a more sustainable and healthy lifestyle.

Navigating without a single occupancy car is doable. I gained some great perspective along the way through biking, use of transit and the occasional carpool. I had to plan and have a little flexibility. My schedule as a Supervisor changes from day to day and hour to hour; I move throughout the region during “non-commute” hours. Using the bus almost daily made my experience increasingly easier.

My standard commute was a 15-minute bike ride from my home to my office. For additional travel, I rode my bike or walked the first-and-last-mile connections to and from the bus. I was impressed with the times of service and the synchronicity of transfers. I did not miss a transfer, and never waited for a bus transfer for more than 5-10 minutes. A bus was never more than a few minutes late, which is pretty amazing given traffic congestion. I was able to keep a normal schedule as a County Supervisor, using regional buses for appearances in San Francisco, the East Bay and Sonoma County.

I do see areas for improvement.  We need bike parking at the transit stops for leaving a bike after riding the first mile, without taking a bicycle along for the rest of the day. Placing bike racks on the front of buses is a great feature that should also be expanded. We need focused attention to make city streets bike and pedestrian friendly. I encountered pinch points on designated “bike routes,” narrow sidewalks where pedestrians and bicycles share the same path, and areas heavily congested with cars. I re-learned the lesson time and again that both bicyclists and automobile drivers need to stay alert, “share the road” and watch out for each other’s safety. #RideWithDamon was as much about being mentally in shape as physically.

I have a vision where biking is safe, convenient and accessible for people of all ages; where people can find seamless connections between bicycling and other forms of transit, and biking becomes the “go to” healthy alternative for getting to work, going to school, traveling around town, as well as continuing as an enjoyable form of recreation. I’m interested in electric pedal assist bicycles and how they can expand the number of people who can commute by bicycle, especially in hilly California.

I found that during the 30 days of #RideWithDamon that I arrived at my destination with a clear mind having ridden my bike. Having the ability to work on Wi-Fi equipped buses was great for arriving at my destination prepared for meetings. I also felt good knowing that my actions contributed to a better environment for our communities.

This challenge left me feeling energized and healthy. I hope to continue to ride my bike and use transit several days a week going forward because it does help to inform my decisions on transportation.  #RideWithDamon challenged me to change my habits away from single occupancy car trips. I did all of the trips without changing into spandex, just hopped on my bike and rode. I can’t wait to do it again next April, and in the meantime continue to rely on alternative transit as much as possible. I hope to have set an example of what is possible. Try to leave your car in the driveway once a week; I think you will be pleasantly surprised.